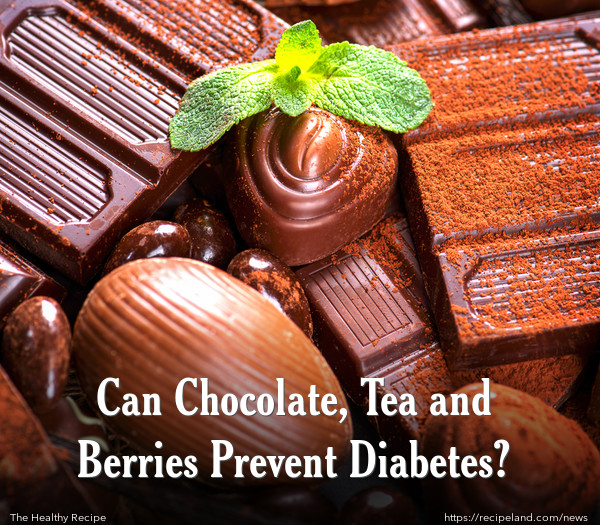 A new study shows a correlation between eating certain foods and having a lower risk of developing Type 2 diabetes.

For those at risk or already diagnosed with Type 2 diabetes, diet and nutrition can play a big role in controlling this chronic condition. The recent study showed how the flavonoids that are contained within certain berries, tea and chocolate can help protect those affected.

Researchers at the University of East Anglia and King’s College in London studied approximately 2000 healthy women and tracked their diets carefully.

What they discovered is that those who consumed large amounts of berries, chocolate and tea displayed a lower resistance to insulin, which led to better regulation of their blood sugar levels, one of the indicators in Type 2 diabetes.

Additionally, consumption of these foods, which contain high levels of flavonoids and anthocyanins, also lowered the presence of inflammatory processes found in the body, further protecting them from developing other chronic health conditions, including obesity, heart disease and many types of cancer.

Although nutritional studies have taken place previously, this is one of the larger and more comprehensive studies that analyzed how regular consumption of these foods can help to improve insulin resistance.

Professor Aedin Cassidy, a lead researcher in the study, states, “We found that those who consumed plenty of anthocyanins and flavones had lower insulin resistance. High insulin resistance is associated with type 2 diabetes, so what we are seeing is that people who eat foods rich in these two compounds — such as berries, herbs, red grapes, wine — are less likely to develop the disease.”

The women who consumed the largest amounts of anthocyanins, according to the food questionnaires, showed the least amount of chronic inflammation, which can lead to obesity, heart disease and cancer.

As these conditions are known to be among some of the most deadly chronic health conditions, these results point toward exciting developments in the research related to diet and health.

Certain foods, such as chocolate and red wine are often considered to be less healthy choices, but, as this study shows, they do contain some very beneficial compounds that can help to improve insulin resistance (lessening the risk of developing Type 2 diabetes) and decreasing inflammation in the body. These foods may find their way into healthy diets, as a result.

Certain foods were found to contain specific flavonoids that are thought to protect against diabetes best, including foods of certain colours like blue or red (berries, red wine, grapes, or blue vegetables).

Other vegetables are thought to have protective properties included herbs like parsley and thyme, as well as celery.

The exact amount required is not yet determined, but these foods certainly had an effect on blood sugar levels as well as other major metabolic processes.

Further research will be necessary to help quantify just how much of these foods a person would need to consume regularly to reap the benefits available, but for now, understanding the connection between the consumption of flavonoids and anthocyanins is an important discovery in the fight against diabetes and heart disease.

With nearly 2 million people diagnosed each year with diabetes, finding ways to prevent this disease is becoming a worldwide concern.