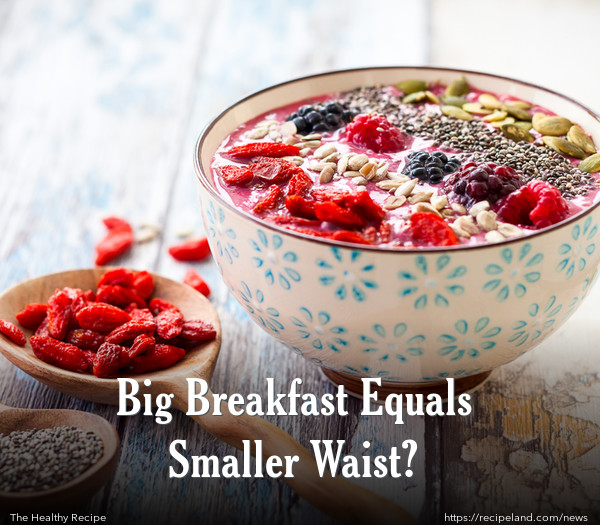 A recent study suggests that when you eat is just as important to weight loss as what you eat.  The results of this research study were published in the journal Obesity.

Tel Aviv University researchers conducted this study.  They wanted to determine if there is a demonstrable link between obesity and the time of day food is eaten.  Researchers also examined how eating times impacted the heart health and insulin levels of participants.

Professor Daniela Jakubowicz of Tel Aviv University’s Sackler Faculty of Medicine and the Diabetes Unit at Wolfson Medical Centre was the study’s lead researcher.  “Metabolism is impacted by the body’s circadian rhythm – the biological process that the body follows over a 24 hour cycle,” said Jakubowicz.  This means that the way the body digests and absorbs food is greatly impacted by the time of day that food is eaten.

This study also concluded that even though the women of the “big breakfast” group ate a dessert item every day, they had better overall health.  These women demonstrated dramatically lower levels of glucose, triglycerides, and insulin.  This means that they had a lower risk of high cholesterol, cardiovascular disease, diabetes, and hypertension than their “little breakfast” group counterparts.

The women of the “little breakfast” group were found to have increased levels of triglycerides, even though they had lost weight and inches off of their waists.

As researchers monitored the levels of glucose in both groups, they noted that the “big breakfast” group did not experience high spikes in blood glucose levels.  These spikes are normal after a meal and can cause high blood pressure and strain on the heart.

The study pointed out that eating healthy foods on a schedule and regularly exercising will result in the highest amount of weight loss and better overall health.   This means no more late night snacks.

Jacubowicz said, “Mindless eating in front of the computer or television, especially in the late evening hours, is a huge contributor to the obesity epidemic.”