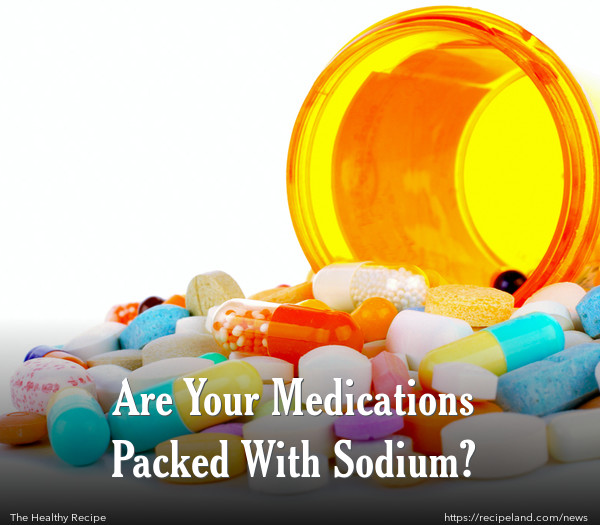 This study, conducted by British Researchers, examined the effect of sodium containing medications on high blood pressure.  Half of the participants were given medications containing sodium and the other half were given a sodium-free version of the same medication.  Then, the health of participants was tracked for a period of seven years to determine if there was any increase in incidents of high blood pressure, heart events, or stroke.

Medications that are effervescent or fizzy, such as soluble aspirin, paracetamol, ibuprofen, calcium, zinc, and vitamin C, contain sodium bicarbonate so that they dissolve properly in water and are absorbed better by the body.  Unfortunately, pharmaceutical manufacturers are not required to list the amount of sodium on their labelling if it is less than 23 mg.

For example, if you were to treat chronic back pain around the clock with effervescent aspirin, or Alka Seltzer, you would ingest more than the daily recommended 1,500 mg of sodium.  When added to the sodium ingested through your diet, levels become dangerously high.

Researchers pointed out that there is an established link between diets that are high in sodium and high blood pressure.  However, the amount of sodium ingested through medications and its effects have not been tracked before.

For those who are already experiencing high blood pressure the potential effects of these medications is even greater.  The World Heart Federation reports that at least 970 million people around the world are suffering from hypertension.  The American Heart Association reports that high blood pressure is the number one cause of death for women in the United States.  The American Heart Association also lists these dangerous side effects of excessive sodium:

What can you take away from this study?