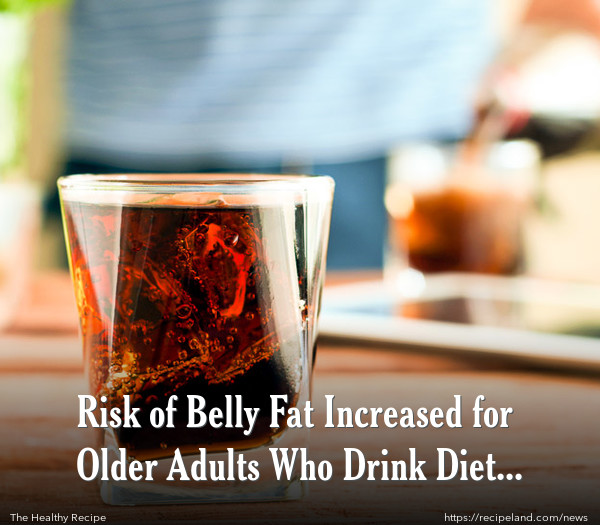 A recent study conducted at the University of Texas Health Science Centre in San Antonio revealed that increased intake of diet soda can lead to more belly fat for older adults. This, in turn, can contribute to an increased risk of metabolic issues as well as cardiovascular disease.

The study, which was recently published in the Journal of the American Geriatrics Society, examined data for over 750 adults over the age of 65. Sharon Fowler, MPH, a lead researcher, explains, "Our study seeks to fill the age gap by exploring the adverse health effects of diet soda intake in individuals 65 years of age and older. The burden of metabolic syndrome and cardiovascular disease, along with healthcare costs, is great in the ever-increasing senior population."

Obesity is a significant problem, which becomes an increased risk as people age. Many adults make an attempt to combat the problem by opting for sugar-free drinks, sweetened with artificial sweeteners such as aspartame, saccharine, or sucralose. This has resulted in a significant increase in consumption of diet soft drinks over the past 30 years. Obesity has also been on the rise during this same time frame. Many studies have already been conducted to explore possible connections in middle-aged and even young adults.

The obesity epidemic may have many causes, including metabolic syndromes, diabetes, heart disease, stroke, and more. According to the World Health Organization (WHO), there are nearly 2 billion adults who are considered overweight or obese (meaning they have a BMI of greater than 30). This number has doubled in the past 30 years.

The recent study, led by researchers at the San Antonio Longitudinal Study of Aging (SALSA) evaluated the participants for the amount of diet soda that they consumed, and their height and weight at the onset of the study. Participants were evaluated again on three separate occasions, over the course of more than 9 years. By the time of the first follow up, just under 80% of the participants were surviving. This number dropped to 73% by the second follow up, and 71% at the third.

Researchers determined that one of the main correlating factors between increased abdominal fat and health problems for this study was the amount of diet soda consumed by the participants. As abdominal circumference increased, so did the risk of developing heart disease, obesity, diabetes and more.

Researchers recommended that older adults who may be at risk for developing cardiac problems or metabolic issues limit their intake of diet soda or any other artificially sweetened beverages.

First, it's important to recognize that this observational study looked at an aging population -- those over 65 at the beginning of the study, who are already at risk of weight gain and cardiovascular disease -- and then made conclusions based on associations. Second, credible research confirms that diet soft drinks can be effectively integrated into a weight loss plan. For instance, a randomized clinical trial published in the American Journal of Clinical Nutrition concluded that those who consumed diet beverages in place of caloric ones consumed fewer calories than other control groups, including those who consumed only water: http://bit.ly/Ik4zjC. Bottom line: this study fails to debunk in-depth science on this subject, which confirms diet soft drinks can be a helpful diet tool.