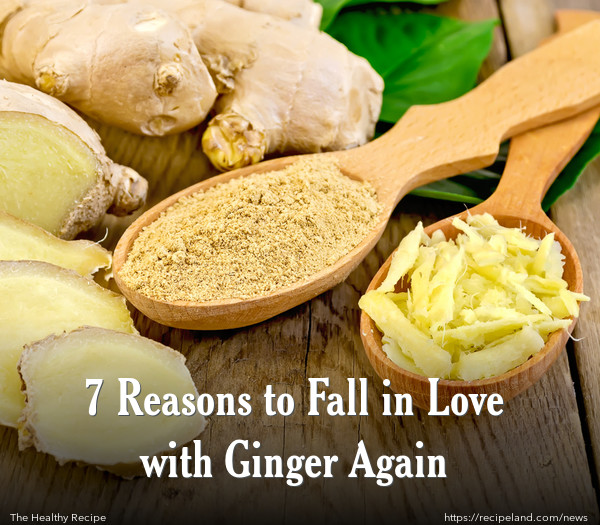 Hailing from southeastern Asia, the spicy and pungent rhizome of the ginger plant has long been valued for its healing properties.

Nowadays, in almost every culture and geographical area around the world, ginger is used for its aroma, flavour, and, healing powers.

Just a small amount of ginger can make a big difference to your overall health! Try adding it to your favourite sweet or savoury recipes, chewing on crystallized or candied ginger, taking ginger supplements, or drinking ginger tea to improve your health in a variety of ways.

1. Ginger is packed with antioxidants. The antioxidants in ginger reduce inflammation throughout your body and help keep inflammatory-related diseases and conditions under control. A study published in Life Sciences found that compounds within ginger defend your body against destructive free radicals.

2. Arthritis. Ginger has been specifically tested for its effectiveness to combat arthritis pain and swelling. Studies have shown that a majority of those who with arthritis-related pain and swelling experience relief of these symptoms after taking ginger. One study, published in Osteoarthritis Cartilage, found that patients suffering from arthritis in their knees experienced less pain, swelling, and limitations after taking ginger for six months.

3. Motion sickness. Ginger prevents or relieves all of the problems caused by motion sickness, such as cold sweats, dizziness, nausea, and vomiting. It is especially effective for preventing the feeling of seasickness. One study even found that ginger is more effective in treating motion sickness than Dramamine.

4. Pregnancy-related vomiting and nausea. Chewing a piece of candied ginger can reduce even the most intense symptoms of morning sickness during pregnancy. Many women prefer ginger to anti-vomiting drugs because it’s safe and natural.

Some anti-vomiting drugs can cause dangerous side effects, such as birth defects and other severe problems during pregnancy.

5. Ovarian Cancer. A study from the University of Michigan, led by Dr. Rebecca Liu, found that gingerols can kill ovarian cancer cells. Gingerols are phytonutrients and give ginger its sharp flavour.

Chemotherapies often lose their effectiveness against cancer cells over time as these cells become resistant to the chemotherapy drugs. Cancer cells do not build up a resistance to ginger, so it remains effective against them over the course of the disease.

The prognosis for ovarian cancer patients is often poor. It usually goes undiagnosed until it is the later stages and has spread to other areas of the body. This has led some doctors to recommend taking ginger as a preventative measure, especially against ovarian cancer.

6. Healthy Immune System. Ginger can help your body produce a healthy sweat. How does this help the immune system? A healthy sweat allows your body to remove toxins. A study out of Germany concluded that your sweat can help prevent infections because it contains a compound that defends your body against bacteria and fungi.

7. Diabetes: For those who have been diagnosed with diabetes, taking ginger can protect your kidneys from damage related to high amounts of protein in your urine. Ginger combats many of the conditions often associated with diabetes by reducing your cholesterol, increasing circulation, and reducing blood pressure levels.

If you take blood thinners or blood pressure medications be sure to talk to your doctor before consuming ginger.