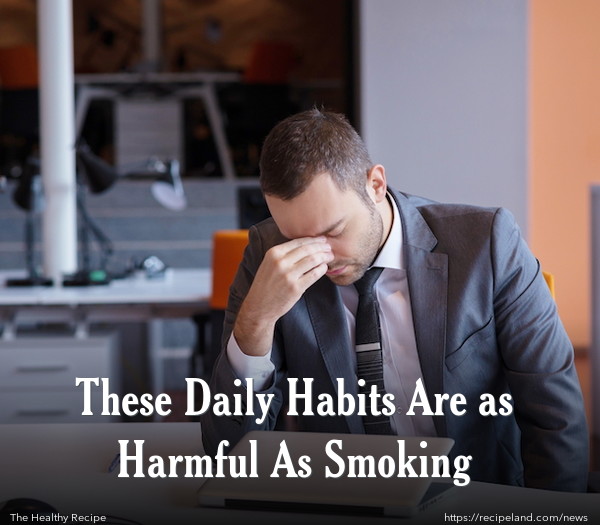 It is commonly believed that smoking is one of the worst things that you can do. While this is true, there are other daily habits that are quite common and can be just as harmful as smoking. These six habits are probably as bad for you as smoking, because they can expose you to harmful chemicals or cause chronic health problems that can lead to early death if you are not careful.

Luckily, like smoking, all of these habits can be changed and you can begin to lead a healthier lifestyle.

Studies have shown that sitting all day, even for those who exercise regularly, can cause a wide range of health problems, including cardiovascular disease and a variety of cancers. Fix this problem by taking frequent breaks or use a standing workstation.

When you are relaxing at home, try to break the habit of sitting in front of the television for long periods of time, and be sure to take frequent short walks or putter around the house. Even better, take an extra trip to the gym with your family.

2. Too much meat and cheese in your diet.

Animal proteins contain high amounts of IGF-1, which is a growth hormone that is thought to increase the growth of cancer cells.

A recent study conducted at the University of Southern California and published in Cell Metabolism found that those who consume diets containing large amounts of animal proteins during their 40s and 50s were more likely to die of cancer than those who consume low protein diets. The actual death rates for this are similar to those for smoking.

Instead of focusing on eating meat and cheese, opt to replace some of your food choices with vegetarian options. Plant based foods like beans can give you plenty of protein without increasing your chances of developing cancer. During middle age, adults should eat about .8 grams of protein for every two pounds of body weight each day. After the age of 65, animal proteins do not show the same health risks, which is thought to be related to a decrease in the production of IGF-1.

About 34% of Americans use stoves in their kitchens that are fuelled by natural gas. This can lead to increased amounts of carbon monoxide, nitrogen dioxide, and formaldehyde each time you prepare a meal. These are among the same chemical contaminants that you are exposed to when smoking.

A study published in the December 2013 issue of Environmental Health Perspectives showed that homes with natural gas stoves regularly had higher levels of these three contaminants than were considered within the safe range.

If you cook with natural gas, make sure that you are regularly using your vent hood while cooking. Additionally, it can be more helpful to cook on the back burners, since vent hoods are usually not properly centred to collect the pollutants.

When you cook over high heat with certain oils, especially shortening and soybean oils, particles can be released into the air that are similar to those found in cigarette smoke. These particulates include aldehydes and polycyclic aromatic hydrocarbons, which are known to be very harmful to your health and associated with a range of chronic health conditions and cancers.

Experts have reported that indoor tanning is the cause of more than 400,000 cases of skin cancer each year. This is higher than the approximately 225,000 cases of lung cancer attributed to smoking. Instead of tanning, you can increase your intake of carrots and tomatoes, which contain carotenoids and may give you a more glowing skin tone.

Not only will missing out on sleep make you feel cranky and irritable, it can lead to major problems like high blood pressure, heart attack, stroke, obesity, and many other serious health conditions. Those who get less than 6-7 hours of sleep have the same mortality rates as smokers.

Interrupted sleep can increase the growth rate of cancerous tumours, as well. If you are feeling chronically tired, you should visit your doctor to find out if there is a treatable cause, such as sleep apnea.

Smoking is definitely a bad habit, but these six unhealthy habits are also very harmful to your health. Luckily, these are all things you can change, beginning today!