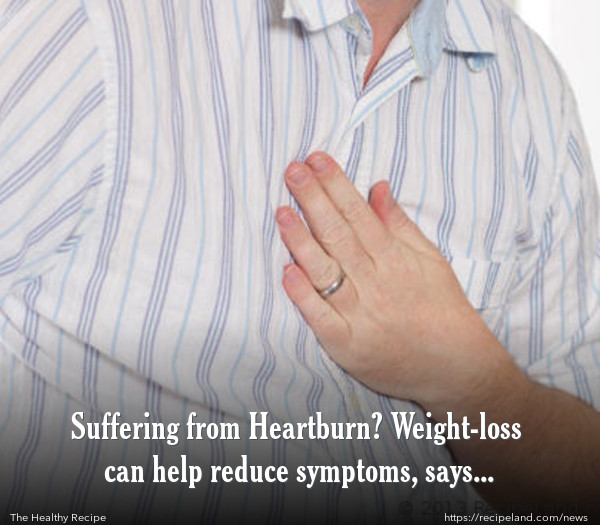 A recent study found that weight loss helps patients suffering from GERD (gastroesophageal reflux), a chronic type of heartburn. Heartburn, also known as indigestion or acid reflux, is a common condition for most adults that can occur for a variety of reasons - usually from eating spicy or acidic foods.

Many of us will experience mild heartburn or indigestion several times a month without any long-term discomfort or damaging side effects. GERD, on the other hand, is a much more severe form of acid reflux that can result in esophageal damage and other complications due to stomach acid constantly flowing upwards and entering the esophagus.

The research study charted weight-loss progress of over 200 overweight or obese middle aged male and female patients, and how their GERD symptoms improved or worsened over the course of the research. After the first six months, based on all the patients’ weight loss, they had lost an average of almost 40 pounds. Before the start of the weight reduction program and resulting weight-loss of this study began, 38% of patients displayed the chronic symptoms of GERD, but by the six month mark only 16% of patients were still suffering from GERD.

According to the author of this study, Dr. Preetika Sinh, a gastroenterology fellow at the University of Kansas School of Medicine, “If you lose weight, you will have improvements in your reflux symptoms.” This may be easier said than done, as results show that the majority of the patients packed the pounds back on after the first six months. Not surprisingly, the GERD symptoms in this study group increased as patients regained the weight – from 16% to 22%.

The patients who did not regain any weight were then monitored closely, and those who had severe GERD as the study began continued to show improvement and a steady decline in heartburn symptoms.

Researchers encouraged all weight-loss patients to perform one hour of moderate exercise, such as jogging or walking, five times a week. Most of the patients recorded less than the recommended amount of exercise weekly, but this added to another interesting discovery.

Women who exercised several times a week had fewer heartburn symptoms, while exercise did not seem to decrease heartburn symptoms in men. There is no clinical explanation why exercise led to less acid reflux in women but not in men. Even so, making time for mild to moderate exercise in our busy schedules has health benefits that go beyond heartburn reduction and weight loss.

Other studies have found that even small amounts of weight loss can help reduce acid reflux symptoms, in addition to a healthier diet and life style changes such as regular moderate exercise.