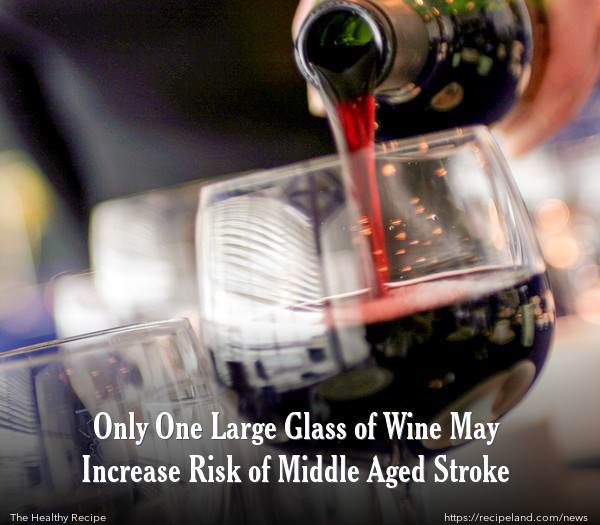 Those who enjoy their daily glass of wine may want to consider the results of a new study. A study that was recently published in the journal Stroke showed that middle-aged drinkers who have only one large glass of wine per day may increase their own risk of stroke by 33%.

Researchers followed over 11,000 sets of twins for more than 43 years, and concluded that middle-aged people who were otherwise healthy showed that only one large glass of wine increased the risk of stroke and diabetes significantly. Participants were in their 50s and 60s, and consumed at least two drinks per day (one large glass of wine or a pint of strong beer) showed a much higher risk than non-drinkers of the same age.

Healthy lifestyle guidelines suggest that men should not consume more than 3-4 units of alcohol per day, and that women should be limited to 2-3 units daily. According to pub guidelines, a large glass of wine is about 250ml, which equate to about 1/3 of a bottle of wine. Because the alcohol content is about 12%, this is the equivalent of three drinks.

Many previous studies have shown that high consumption of alcohol contributes to an increased risk of stroke, but this is the first study that has correlated the consumption with age. As a person ages, the risk of diabetes and high blood pressure increase the risk of stroke for persons over the age of 75.

Leading researcher, Pavla Kadlecova, of St. Anne’s University Hospital in the Czech Republic, states, “We now have a clearer picture about these risk factors, how they change with age and how the influence of drinking alcohol shifts as we get older. For mid-aged adults, avoiding more than two drinks a day could be a way to prevent stroke in later productive age.”

As researchers examined the twin results, based on responses to questionnaires administered between 1967-70, identical twins under the age of 60 were assessed regarding their consumption of alcohol. Identical twin pairs with one twin consuming less alcohol showed less stroke risk for the twin with less consumption, as compared with their twin. Researchers concluded that both genetics and lifestyle contributed to the difference.

Dr. Shamin Quadir, of the Stroke Association, stated, “Alcohol is one of the world’s leading causes of ill-health, and regularly drinking large amounts can significantly increase your risk of a stroke. Enjoying alcohol in moderation, taking regular exercise and eating a balanced diet are simple ways to reduce your stroke risk.”

Although another recent study conducted at Harvard University showed that a small glass of wine daily could reduce the risk of heart failure by about 20%, but more than a small amount could lead to health problems.

Evaluating one’s use of alcohol is important when considering a healthy lifestyle, and ensuring that any consumption within healthy ranges is important.