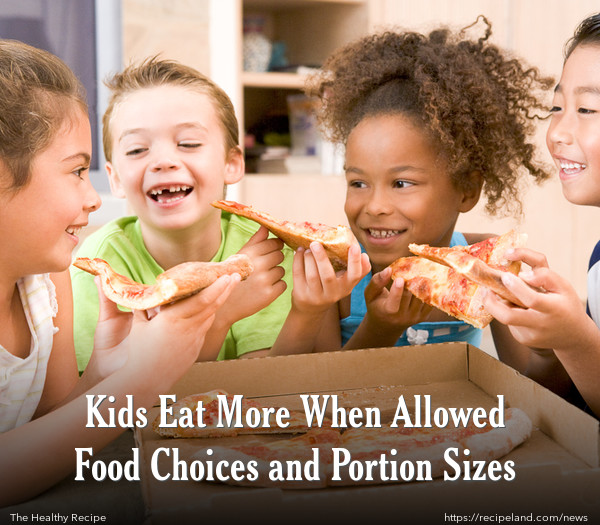 A recent study of young school-aged children supports the same findings of numerous adult studies: when given the chance to self-serve using larger plate sizes during a meal, we consume more calories.

The study allowed children to use large plates and bowls meant for adults and serve themselves with many different food choices. The children ended up adding almost 100 extra calories worth of food to their plates.

In this case, however, plate size was not as much as a factor as the children being able to serve themselves. Many children took larger helpings of the entrée dishes available to them simply because they liked those dishes, while serving themselves smaller portions of side dishes of vegetables or fruit.

“Children served themselves more with larger plates and bowls and consumed nearly 50% of the calories that they served. This provides new evidence that children's self-served portion sizes are influenced by size-related facets of their eating environments, which, in turn, may influence children's energy intake.”(1)

Just because the children filled the larger plates did not mean that they ate everything that they had served themselves. All the children in the study were given milk and bread as well.

Childhood obesity is a public health crisis that school administrators and politicians are all working to curb. The best way in limiting daily calories from school lunches is by offering healthier alternatives.

The two entrée dishes that children could choose from, and take as much as they wanted, were spaghetti and chicken nuggets. These entrées were the main reason the caloric intake was higher in children who were given larger plates.

The results of the study suggest that school children should be given smaller portion sizes of higher fat and higher calorie entrées and larger portions of healthy fruits and vegetables. The research also suggests that parents should consider the relationship between their children’s plate sizes and calories consumed with each meal. Healthy side dishes should be served with larger plates or bowls while higher calorie dishes should be served using smaller dishware.