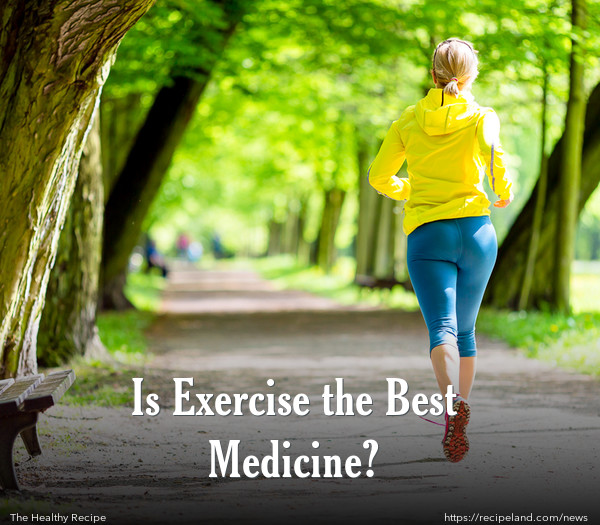 They suggest that doctors should consider prescribing regular exercise in place of, or in addition to, patient’s pharmaceutical medications for many diseases.

Researchers from Harvard Medical School, Stanford University School of Medicine and the London School of Economics believe that more research trials are needed to compare exercise routines and prescription drugs. They want to determine the best ways to reduce the risk of death caused by specific diseases in order to help physicians and their patients come up with better treatment options.(1)

Regular exercise is part of a healthy lifestyle, and has been shown to help guard against obesity, type 2 diabetes and heart disease. Despite these health benefits, less than 15% of residents in the UK make exercise part of their regular routine.

While exercise rates are down, prescription medication usage is soaring. There was an average of just over 11 prescribed drugs per person in England in 2000, which had risen to nearly 18 prescriptions per person in 2010. Exercise may be the key in improving national health, and preventing mortality caused by preexisting diseases.

These researchers have focused on the effectiveness of drugs compared to exercise based on the death rates of patients being treated for heart failure, stroke survivors in rehabilitation, and those at risk for developing diabetes or coronary heart disease (CHD).

Over 305 research trials with nearly 340,000 patients were studied, and no overall differences were found between drug treatments and exercise for preventing diabetes and cardiovascular disease. In fact, they found that stoke patients responded better to exercise than medications. Heart failure, however, was most effectively treated by diuretic medications.

So while exercise may be more effective than prescriptions for some diseases, it may not be the answer for all patients. What experts know for sure is that exercise clearly helps prevent diseases, and can be used as treatment with or without medications.

Authors of another study, published in 2012 state that: “Exercise can be considered as treatment of established diseases. These include commonly occurring conditions such as depression, diabetes or cardiovascular diseases…. (type 2 diabetes, dyslipidemia, obesity, insulin resistance); muscle, bone and joint diseases (rheumatoid arthritis, ?bromyalgia, chronic fatigue syndrome, osteoporosis); cancer; and depression.”(2)

Exercise greatly reduces cancer rates, particularly breast and colon cancer – which may be explained by lowering amounts of stored body fat, increasing the number the calories burned through exercise (especially for people who eat a diet high in fats), changes in hormone and insulin levels, and improved immune system function.

Exercise has proven positive effects on mental health, stress reduction and treatment of depression. “Special attention must be paid to the psychological effects of exercise. These are so powerful that we would like to propose that exercise may be considered as a psychoactive drug. In moderate doses, it causes very pronounced relaxing effects on the majority of the population.”(2)

The authors of this study argue that exercise is most effective when prescribed in the right dosages, just like drugs. Every patient has different fitness levels and physical limitations depending on their health, and doctors should prescribe exercise routines to their patients accordingly.

Regular exercise has more long term health benefits than previously thought. Even if you are on several medications for serious medical conditions, you should consider speaking with your doctor about the right exercise program for you along with taking your prescription drugs.

While exercise may be a better alternative to help treat depression and serious physical diseases, never stop taking your prescription medications without your doctor’s knowledge and supervision.