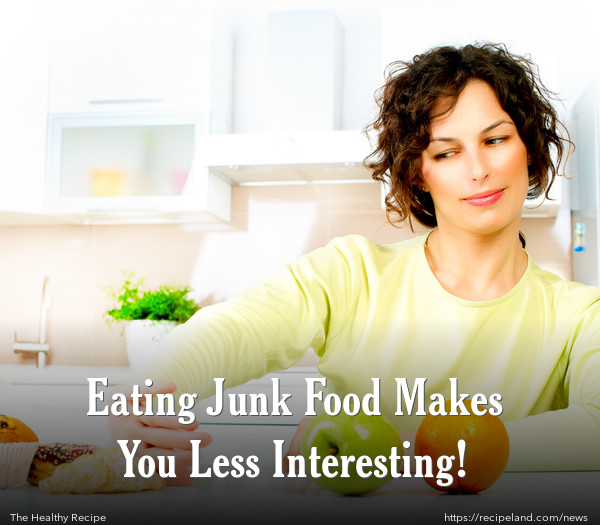 Junk food is simply not good for you! Not only does it make you gain weight, a recent study reveals how eating junk food makes you boring to be around, especially during meal times.

A group of researchers at the University of New South Wales published a study recently in Frontiers in Psychology. The study explored the effects of eating a simple “cafeteria diet” on animals natural curiosity and novelty-seeking behaviors. A cafeteria diet is one that is composed mainly of inexpensive, calorie-loaded and nutrient-lacking foods.

After feeding two different groups of rats two different diets for two weeks, data was examined. One group was provided with low fat, high nutrient foods, while the other was given a wide choice of foods, including plenty of high-fat junk foods like cookies, cake and dumplings.

At the end of the study, it was found that those rats who consumed the high-fat diet gained excessive weight and became less interested in their environment, and less curious about novelty.

Animals, including humans, have a unique natural tendency to prefer novel experiences. This is shown over and over throughout our daily lives. For example, if you eat the same thing for lunch every day, you will typically begin to crave something different soon.

But, when rats ate junk food every day, they began to stick to choosing the junk food. Those rats that were provided with healthier options continued to seek out new flavors and experiences.

Researchers tested this idea by offering two flavors of Kool-Aid, cherry and grape. Those rats on the junk food diet consumed more of one flavor than the other consistently. Those provided with the healthy diet consumed equal amounts of both beverages, showing no preference for one flavor or another.

Morris explains that this "suggests that there's something going on in the brain of the animal that persists beyond the exposure to that unhealthy diet.” Typically, those who consume large amounts of junk food simply continue to crave more and more junk food, leading to a vicious cycle.

Although rat studies may not directly correlate to human behavior, and researchers continue to disagree about the importance and relevance of sensory-specific satiety and memory, and whether or not this becomes impaired in obese people. Either way, it is still healthier to limit junk food and make healthier choices.