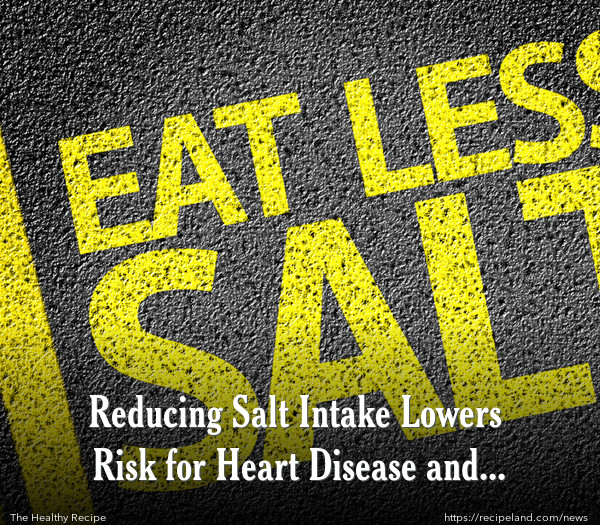 The first of these findings studied over 3000 people, and showed that even a small reduction in daily sodium intake greatly lowered high blood pressure. This led to decreased risk for stroke, heart attack and heart failure.

Another study looked through over 50 previous studies on the same research. What it found was that limiting dietary salt intake always lowered people’s blood pressure and reduced the risk of cardiovascular disease in adults. Researchers also found that children’s blood pressure was lowered when their salt intake was reduced.

The third study used research from over 30 clinical trials that included nearly 130,000 people. It showed that increasing potassium intake also lowered blood pressure and reduced the risk of stroke by nearly 25%.

While sodium is widely available as common table salt, and added to most prepackaged foods, potassium must be taken as a supplement or eaten in fresh foods. Legumes, fresh fruits and vegetables are the main source of natural dietary potassium.

There is an international goal set by the World Health Organization to reduce daily sodium intake to 5 or 6 grams for adults by the year 2025 – citing the current research that this is a necessary level to reduce cardiovascular related deaths.

A 2012 study stated that: “Most of the U.S. population consumes sodium in excess of daily guidelines. Excessive sodium consumption raises blood pressure, which is a major risk factor for heart disease and stroke, the nation's first and fourth leading causes of death. Identifying food categories contributing the most to daily sodium consumption can help reduction.”(1)

These researchers recommend that people need to check labels and choose foods that are lower in sodium. Fast foods are the biggest culprit when it comes to high levels of added salt. Staying away from fast food is a good idea for anyone who is trying to reduce their risk of heart disease and stroke – especially for people who already have high blood pressure.

“The Heart Foundation Tick has been helping Australians make healthier food choices for over 20 years. As a trusted, independent not-for profit program, Tick continuously works with food companies to improve the nutrition of the foods we eat most often.”(2)