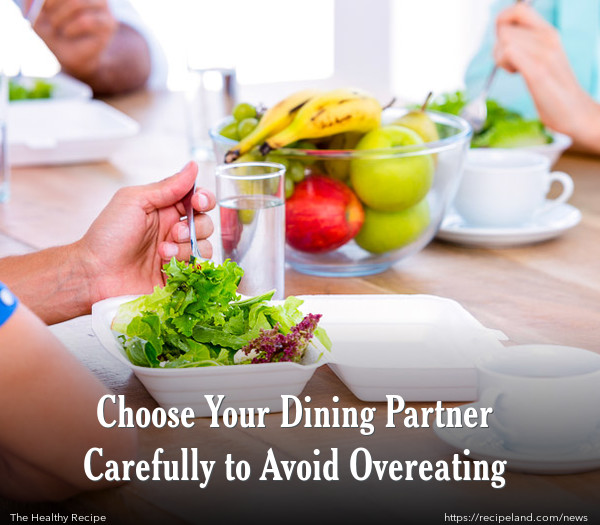 When you are trying to follow a healthy diet, it is not only important to pay attention to what you actually put into your mouth, but also choose the right dining companions. A new study, conducted at UNSW Australia, found that social modelling has a significant effect on how much a person consumes at a meal. People tend to eat less than they might eat if alone when dining with a companion who consumes a small amount of food.

Lead researcher, Lenny Vartanian, an associate professor of the UNSW School of Psychology, explained that people adjust the amount they eat according to the social situation they are in. Vartanian states, "Internal signals like hunger and feeling full can often be unreliable guides. In these situations people can look to the example of others to decide how much food they should consume.”

During the study, 38 other studies were reviewed and carefully examined to determine the amount of food that people ate under certain conditions and in certain company. Results of the study were recently published in the journal, Social Influence.

Vartanian expands his statements by saying, "The research shows that social factors are a powerful influence on consumption. When the companion eats very little, people suppress their food intake and eat less than they normally would if alone. If the social model eats a large amount, people have the freedom to eat their normal intake, or even more if they want."

The social effects of how much you consume are observed in many different scenarios, with both healthy and unhealthy foods, and the level of hunger often has nothing to do with the amount of food consumed.

Even when the dining companion is not around, the effects remain. "It even occurs when the companion is not physically present and diners are simply given a written indication of what that other person ate," says Vartanian.

The social effects of companion dining are greater for women than men, and researchers think this may be related to the fact that women are more likely to be concerned about overeating. Vardanian offers another possible explanation, "Or the explanation could be more mundane, that undergraduate males participating in the research are over-enthusiastic about an offer of free food.”

The social modelling effects are also stronger for older children than in younger children, suggesting that many eating behaviours are learned. "Media reports usually focus on how portion size affects how much we eat, but this modelling effect deserves as much attention, because of its big impact on people's ability to regulate their intake of food," says Vartanian.