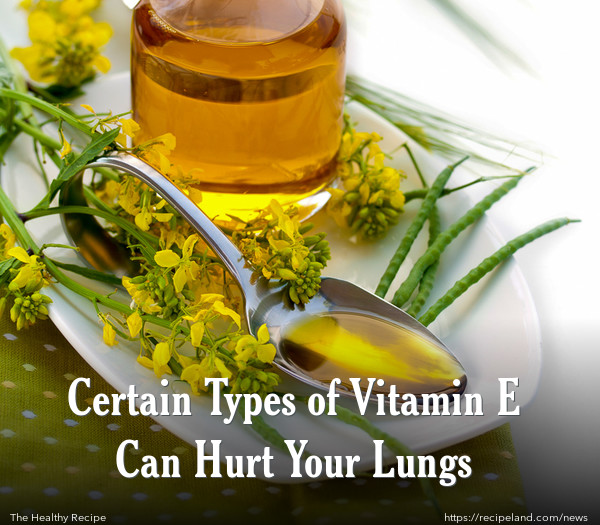 With so many nutrition experts recommending an increase in the consumption of Vitamin E, it is important to understand some new research that suggests that certain “healthy” oils that contain high levels of Vitamin E may contribute to the increase in symptoms for certain lung conditions, such as asthma. The oils in question are canola, soybean and corn oil.

Vitamin E has different effects on health, depending on the source and form in which it is consumed. The particular form of Vitamin E that is in canola oil has been associated with reduced lung function. The specific form is called gamma-tocopherol and is found in certain vegetable oils.

A different type of Vitamin E, known as alpha-tocopherol, is actually thought to improve lung function and comes from olive oils and sunflower oils. Previously there was not thought to be a difference in the types of Vitamin E and their effects.

One of the lead researchers, Joan Cook-Mills, explains why knowing the difference is extremely important. Considering the rate of affected people we found in this study, there could be 4.5 million individuals in the U.S. with reduced lung function as a result of their high gamma-tocopherol consumption.

With the incidence of asthma on the rise, dietary contributions are being carefully considered. Since the average American diet became more heavily laden with soybean, canola and corn oils, as opposed to butter and lard, the number of cases of asthma has skyrocketed. When the rates are compared to those in other countries, one of the major differences lies in the diets. Those countries with diets focused around olive oils and sunflower oils have far fewer cases of asthma.

In 2010, the United States Department of Health reported that more than 8% of people were diagnosed with asthma. Interestingly, the blood levels of gamma-tocopherol is nearly five times as high as the blood levels found in those consuming larger amounts of olive and sunflower oils, such as Europeans.

This current study examined more than 4,500 participants over the course of twenty years. Participants were at risk for developing asthma because of increased lung inflammation and reactive airways. The study was initiated after a similar study on mice showed fewer symptoms in mice who consumed the alpha-tocopherol rather than the gamma-tocopherol.

Participants were evaluated four times over the twenty-year period, for lung function and tocopherol levels (both alpha and gamma). Those who were determined to have higher levels of gamma-tocopherol in their bloodstreams showed a 10-20% less likelihood of having asthma.

Cook Mills explains the importance, The blood plasma showed how much they had acquired in their tissues,Cook-Mills said. You get vitamin E from your diet or supplements. A 10 percent reduction in lung function is like an asthmatic condition, Cook-Mills said. People have more trouble breathing. They take in less air, and it's harder to expel. Their lungs have reduced capacity.

This study offers a unique perspective with scientific backing regarding the recommendations surrounding the use of Vitamin E, and further research is necessary to determine the relative contribution of Vitamin E to effective lung function. Because the study was large and conducted over a long period of time, these results are thought to be promising in the potential prevention of asthma and other lung problems.