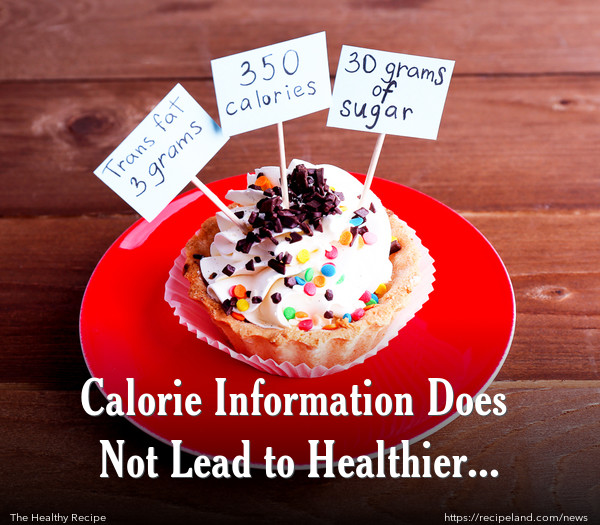 The July 18 online edition of the American Journal of Public Health released the findings of a study conducted by the Dietrich College of Humanities and Social Sciences at Carnegie Mellon University.  The recent calorie-posting mandates on restaurant menus that have been put in place across the United States, serve as the background for this study.  These mandates are part of an overall effort to fight against the rise of obesity.

Based on food receipts and surveys that were completed after patrons finished their meals, researchers determined that adding calorie consumption guidelines to the already available calorie labels on the menu did not help consumers understand the calorie labeling better or lead them to make healthier food choices.  In fact, consumers who received the calorie consumption guidelines ate more calories!

Julie Downs, the study’s lead author and associate research professor of social and decision sciences in the Dietrich College, speculates that when consumers see the daily or per-meal calorie recommendations, and then compare that number to the amount of calories in a menu item, they feel that it is OK to eat a higher calorie sandwich.

Downs points out, “…[customers] still get the same side dish, and drink they would normally get, and then all of a sudden they’re up over 1,100 calories for the meal.  Each item may seem OK, but it adds up.”

Researchers suggest that it is still important to provide fast-food patrons with calorie information, even if it doesn’t immediately affect what they chose to eat.  According to Downs, “Certainly, for someone who’s already health conscious, providing information and transparency is helpful.  But the problem comes when we think that this is the solution to the obesity epidemic…”

Lori Sandon, registered dietitian and assistant professor of clinical nutrition at the University of Texas Southwestern Medical Center at Dallas, added that in order for a fast-food patron to make a healthier food choice, the benefit of choosing a meal with fewer calories must outweigh the negative consequences and instant gratification of a higher calorie meal.  Fast-food consumers consistently report choosing foods based on taste, not health.

It is interesting to note that while fast-food patrons make choices based on taste and satisfaction for themselves, they make choices based on health for their children.  This is according to the study, “Nutrition Menu Labeling May Lead to Lower-Energy Restaurant Meal Choices for Children,” conducted by a Seattle, WA based pediatric practice and reported in the February issue of Pediatrics.

At the practice offices, 99 parents of children, aged 3-6, completed surveys about the foods they usually purchase for their children at fast-food restaurants.  Then they were given picture menus of McDonald’s food items and were asked which foods they would buy for their kids.

In the end, even if fast-food customers do not make healthier choices, providing them with comprehensive calorie guidelines and recommendations can be effective to keep them informed about the food selections they are making for their children and themselves.