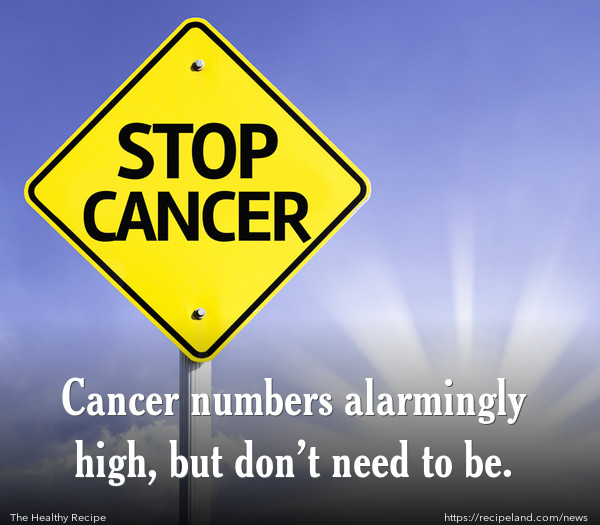 Getting cancer may not be something related to your “chances.” There are things that can be done and choices that can be made to dramatically decrease a person’s chances of developing many types of cancers.

With cancer numbers on the rise around the world, keeping tabs on what we are putting into our bodies becomes more important than ever, according to the World Health Organization (WHO).

Working toward productive ways to cut down the numbers related to obesity, smoking and drinking, using education methods is suggested.

The WHO is predicting that the prevalence of cancer will be over 24 million people worldwide within the next two decades, yet they indicate that nearly half of those cases are likely preventable.

With approximately 14 million people diagnosed each year with some form of cancer, the statistics are alarming—and the cases keep piling in.

Estimates suggest that 19 million cases will be diagnosed yearly in ten years, and 24 million in the decade following that, if there are not significant restrictions placed on things like alcohol and sugar worldwide.

Scientists at the World Cancer Research Fund claim that there are a staggering number of people who fail to comprehend the relationship between diet and cancer. The cost of treating the developing cancers is astronomical, even in the more wealthy countries.

According to Chris Wild, director of the World Health Organization’s International Agency for Research on Cancer, prevention is the key when it comes to reducing these numbers.

"The global cancer burden is increasing and quite markedly, due predominately to the ageing of the populations and population growth. If we look at the cost of treatment of cancers, it is spiralling out of control, even for the high-income countries. Prevention is absolutely critical and it's been somewhat neglected."

When it comes to prevention, the primary causes of cancers that could be prevented include:

Surveys have shown that nearly half of the people in the United Kingdom fail to realize the correlation between nutrition and the incidence of certain cancers.

Approximately 33% of people assume that their family history is the greatest contributor to the development of cancer, though this accounts for a mere 10% of cases.

Results of this study amplify the need for preventative education when it comes to cancer. With such a large percentage of the population failing to realize that many cases of cancer are preventable, the numbers are only going to increase until changes are made.

Those who make healthy lifestyle choices, including avoiding obesity and getting enough physical activity, are going to lessen their risk of developing many types of cancer.

Also, those who eat a nutrient rich diet, filled with fruits and vegetables and whole grains, are going to be far better off than those who ingest large amounts of processed foods and red meats.

Says Dr. Jean King, of the United Kingdom Cancer Research Center, “The most shocking thing about this report's prediction that 14 million cancer cases a year will rise to 22 million globally in the next 20 years is that up to half of all cases could be prevented.

“People can cut their risk of cancer by making healthy lifestyle choices, but it's important to remember that the government and society are also responsible for creating an environment that supports healthy lifestyles.

“It's clear that if we don't act now to curb the number of people getting cancer, we will be at the heart of a global crisis in cancer care within the next two decades."