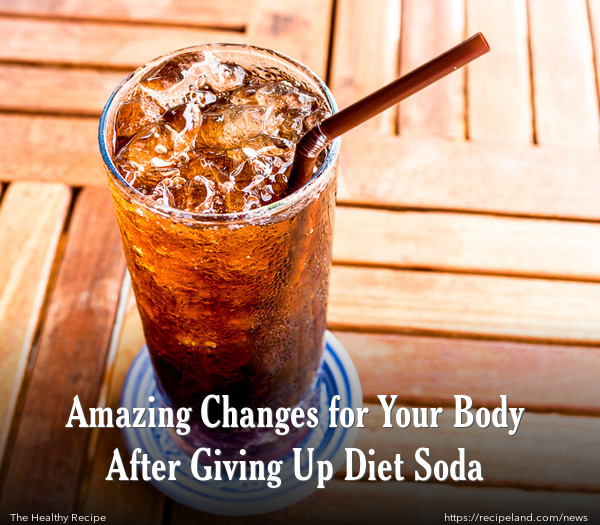 People finally break up with diet soda for a number of reasons. Some start to believe that diet soda interferes with weight loss goals, others finally decide that the chemicals are unhealthy. Whatever the reason you decide to eliminate diet soda from your life, here is a list of some amazing changes you can expect to occur as a result.

Diet soda is known to cause headaches, and when you first eliminate it from your diet, you may find that you get headaches as a result of the withdrawal. Once this stage passes, you might notice that you are thinking more clearly than you have been in a long time. This is because the chemicals that are used to create aspartame, the artificial sweetener used in most diet sodas is known to cause reactions in the brain that include headaches, anxiety, and insomnia, according to a study published in the European Journal of Clinical Nutrition. Rats who consumed large amounts of diet soda demonstrated damage in the nerve endings in the cerebellum, which is the area of the brain that is responsible for much of the motor control of our bodies.

When you give up diet soda, your taste buds will become more sensitive and foods will taste better. You will be better able to detect subtleties in flavour, and this will make foods more enjoyable. Artificial sweeteners overwhelm taste buds with their chemical sweetness. Aspartame is known to be 200 times sweeter than actual table sugar. Splenda comes in at 600 times sweeter. Heather Bainbridge, RD, from Columbia University Medical Centre Weight Control Centre states, “We often see patients change snack choices when they give up diet soda. Rather than needing sugary treats or something really salty like pretzels and chips, they reach for an apple and a piece of cheese. And, when they try diet soda again, they find it intolerably sweet.”

Although many people turn to diet soda to cut calories, it’s the quitting of diet soda that often gets results. A recent study, which followed older adults who drank diet soda, found that they tended to pack on the pounds, especially in the belly region. Each diet soda that you drink daily increases your chances of obesity by 65%, over the next 10 years. A study published in Diabetes Care found that metabolic syndromes increased for those who drank diet soda, including conditions such as obesity, high blood pressure, and high triglycerides, all of which can lead to problems like cardiovascular disease and diabetes.

Eliminating diet soda may be a great way for you to improve your bone strength and reduce your risk of osteoporosis and fractures. A 2014 study determined that each diet soda consumed daily increased the risk of experiencing dangerous hip fractures by 14% for those women who are post-menopausal. Women who drank cola, specifically, were found to have lower bone mineral content in their hips. Scientists are not sure why this correlation exists, but they do know that diet soda can contribute to weakening of the bones.

5. You will make better food choices.

When you drink diet soda, you may feel like it is okay to indulge in other calories. Bainbridge states, “Sometimes those poor choices are built up habits. You’re conditioned to have soda with chips, fries, or something sweet. When you eliminate the soft drink, you also break the junk food habit.”

Mixing alcohol with diet soda in a cocktail causes your stomach to empty more quickly, which can result in a higher blood alcohol concentration. An Australian study published in the American Journal of Medicine found that those who mixed alcohol with diet cola became more intoxicated more quickly. Instead of using diet soda as a mixer, choose club soda, which is naturally calorie and sugar free.

7. You will decrease fat storage and reduce your risk of diabetes.

Weight gain is often connected to hormonal changes. A study published in Diabetes Care showed that when people drank 2/3 of a diet soda before eating had increased activity in the pancreas, with greater insulin production. This causes the pancreas to work harder, which can lead to diabetes.

Eliminating diet soda takes many harmful chemicals out of your system, allowing the kidneys to function more effectively. When the kidneys are not working to eliminate the chemicals, they can better eliminate other toxins, help to stabilize your blood pressure, and help your body better absorb healthy minerals.

You already know that diet soda is not a healthy choice, but consider these important health benefits if you are really trying to kick the habit!


Hermitage, United States
over 6 years ago

Frankly, soft drinks, including low- and no-calorie options, are safe and do not cause the litany of conditions outlined here. For example, contrary to the claim that soft drink ingredients harm bone health, this assertion has been disproved by science. Consider phosphorous, for instance, which has been subject to criticism in this context. The reality, though, is soft drinks contain a very small amount of phosphorous – an amount that does not cause weak or brittle bones. In fact, there is more phosphorous in chicken, cheddar cheese and milk than in soft drinks.

Furthermore, diet soda, and the low calorie sweeteners it contains, is not a culprit driving weight gain and obesity. The fact is diet soda has proven time and again to be an effective tool when it comes to managing calories, as evidenced here: http://bit.ly/Ik4zjC.

While the media is often quick to malign soft drinks and their ingredients, the fact remains that these products are safe – and do not cause the health issues alleged here.