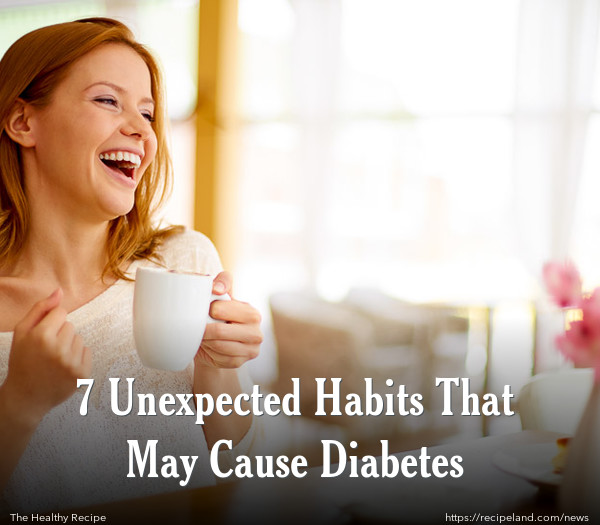 Certain things that you are regularly doing might increase your risk of diabetes.

Consider these 7 surprising habits that might lead to this disease.

1. Cutting back on caffeine.

If you are cutting back on caffeine to improve your health, you might want to consider this evidence first. A recent study by the Harvard T.H. Chan School of Public Health found that study participants who drank 6 cups of coffee daily had 1/3 lower risk of developing diabetes, compared with a control group who did not drink any coffee. There are compounds in coffee that help to reduce insulin resistance and help your body metabolize glucose more efficiently.

A recent study out of Korea found that those who preferred to stay up late had a higher risk of developing diabetes, regardless of whether or not they still got enough sleep (8 hours or so). Researchers think that there may be a correlation between being exposed to higher levels of artificial light during the night hours, which can lower insulin sensitivity and reduce the body’s ability to metabolize glucose efficiently. Night owls usually have less sleep quality also, which can cause metabolic imbalance.

3. You don’t get enough probiotics.

Betul Hatipoglu, M.D., an endocrinologist at Cleveland Clinic, stated, “The risk of diabetes increases when you have more bad bugs (bacteria) than good bugs in your gut.” Make sure you keep your gut balanced with enough good bacteria, to avoid inflammation that can lead to insulin resistance. Good sources of probiotics include yoghurt, sauerkraut, and certain cheeses.

4. You microwave foods in plastic.

When you reheat foods in plastic containers, you may be increasing your intake of certain chemicals that are used to manufacture plastic wrap and plastic takeout containers. These chemicals are thought to be associated with an increased risk of diabetes in children and teenagers. Because the chemicals increase insulin resistance and may raise blood pressure, the risk of diabetes is higher.

Although too much sun can increase your risk of other health problems, not enough sun exposure can increase your risk of diabetes. There has to be a happy medium! A new study conducted in Spain found that those who are vitamin D deficient are more likely to develop pre-diabetes and type 2 diabetes, whether or not they are obese. When you are exposed to the proper amount of sunshine, your body produces more vitamin D and this helps your pancreas to function more efficiently. As a result, more insulin is produced, and blood sugar is better regulated. If you are not able to get enough sun exposure, be sure to take a vitamin D supplement and eat foods rich in the nutrient, like salmon, fortified milk, and fortified cereals.

Those who watch too much television might be at a higher risk for developing diabetes. A study conducted at the University of Pittsburgh concluded that each hour spent watching television increased the risk of developing diabetes by almost 4%. According to Eric Sternlicht, Ph.D., a professor of kinesiology at Chapman University, “Too much sitting can lead to a storage of visceral fat, which increases your waist circumference.” Those with extra belly weight have a higher risk of diabetes.

7. You don’t eat breakfast every day.

Ellen Calogeras, a diabetes educator with the Cleveland Clinic Diabetes Centre, states, “Forgoing your morning meal not only tends to backfire, making you ravenous by late morning, but can also create the perfect storm for type 2 diabetes.” Starving your body will make your insulin levels unstable, and increase your risk.

If you see any habits of yours on this list, it’s a good time to consider breaking them and decreasing your risk of developing diabetes.