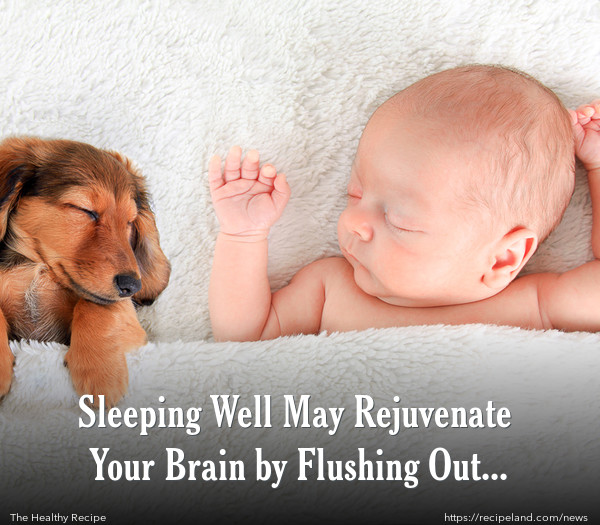 According to the National Institute of Neurological Disorders (NINDS) the gaps between your brain cells widen when you sleep. This gives your interstitial fluid a chance to move in there and flush out toxins, leaving you feeling refreshed the next day. However, these effects are not just short-term; being able to remove neurotoxins also promotes long-term brain health, keeping it stronger for longer.

Being able to clearly measure an altered brain state may answer some of science and philosophy’s greatest questions. While it is widely accepted that sleep is beneficial for the brain, the reasons for this are not entirely clear.

In recent years, neuroscientists have discovered that resting well at night may be key to storing memories. However, this recent discovery regarding neurotoxins may provide an insight into how health-related governing bodies can issue advice regarding neurodegenerative disorders.

The researchers in this study demonstrated the effects of sleep on the brain by examining mice. During the experiment, the movement of dyes around the glymphatic system—the brain’s plumbing system—were observed. The same researchers, led by Dr. Nedergaard, had also recently found that this system controls the flow of cerebrospinal fluid (CSF), which surrounds the brain and spinal cord.

The dye used to monitor the glymphatic system was injected into the CSF of mice that were asleep and awake. According to the results, this dye took longer to disappear in the mice that were awake. This suggests that while you are asleep, your brain has a better chance of removing its neurotoxins.

To measure why this was, electrodes were attached to the mice to measure the glymphatic system’s spaces while they were asleep. Based on the measurements of these electrodes, it became clear that these spaces increase by up to 60 percent when sleeping. The increase in cell space is dependent on the glia—one of the brain’s primary forms of neurological cells.

While this study clearly demonstrated that the absence of noradrenaline during sleep allows the glymphatic system’s spaces to grow, it is still necessary to explain how the scientists were then able to claim that this has an effect on neurotoxin removal. Previous studies have demonstrated that toxins can accumulate in the interstitial spaces of the brain.

When combining this knowledge with the evidence that CSF moves through the glymphatic system faster when you are asleep, it is clear why such a conclusion was reached. However, there is now a need for researchers to establish this process further, making this study a good basis for future research.

With further examination, this study could act as an insight into how to prevent certain neurodegenerative disorders. Among these disorders is Alzheimer’s, which sees patients experience continuous degeneration that leads to a loss of memory and cognitive functions. Other conditions include Parkinson’s disease, which is also induced by brain degeneration.