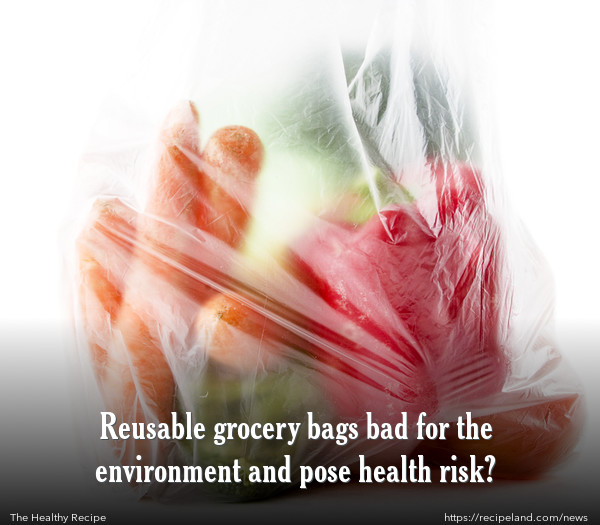 Dozens of media reports and several studies across North America are surfacing that are finding that reusable grocery bags pose a serious health risk and could be harmful to the environment.

CBC News reported today that reusable bags the “must-have for the eco-conscious shopper” may contain unsafe levels of lead.

Health Canada is currently looking into the lead issue.  Last year Health Canada issued an advisory warning consumers about the use of reusable shopping bags.  However at that time their concern had nothing to do with lead but instead of E. coli and other food born cross-contamination.

Recently many Ontario grocery stores started charging extra for bags normally provided at no charge.  In addition the new HST tax in Ontario adds even more to the cost of the once free, safe and hygienic plastic grocery bag.  Discount grocery retailers such as No Frills, Price Chopper and Food Basics always have charged for bags in return for lower prices but offer boxes at the front of the store for consumers to lug their good home.  This is in stark contrast to stores such as Loblaws, Zehrs, Metro and Sobeys who benefit from the extra bag charges by boosting their bottom-line.

A research study by the University of Arizona and Loma Linda University in California found there is “a serious threat to public health, especially from E. coli” and that “consumers are alarmingly unaware of these risks”.

The bacteria levels found by the study were significant to cause a wide range of serious health problems especially dangerous to children.

The best case scenario is that consumers sterilize their reusable shopping with bleach and hot water after use which will kill nearly all bacteria that accumulate. Of course, this would pose environmental risks to the water table with more chlorine bleach entering the water table as it is rinsed down the drain.

The largest problem comes from cross-contamination.  By re-using a bag without sanitizing it between uses, which the study found 97% of consumers do not do, foods are allowed to contaminate the bag which then cross-contaminates the next purchase.

He noted numerous findings of fecal contamination and recommends that all meat purchases should be bagged separately before being placed into the reusable bag. “This should become a mandated safety standard across the entire grocery industry.” reports the news source.

Check-out staff in stores may be transferring microbes from reusable bag to bag as the contaminants get on their hands.  This would make localizing and controlling outbreaks much more difficult as any finding of contamination could come not only from the product purchased but from any number of reusable bags that went through the check-out counter.

A few hours ago, WZZM an ABC affiliate TV station reported “Grocery bags may contain a deadly toxin” citing a recent investigation by The Tampa Tribune.

The report mentions that several stores across the US have removed reusable shopping bags from their stores and are discouraging their use due to the risk to their customers.

It seems the best way for consumers to protect themselves is to demand the grocery store clerk washes their hands to avoid cross-contamination from previous customers filthy reusable bags.  Then bag everything in plastic bags which you then place yourself into your own reusable bag.  Once at home make sure you sanitize your reusable bag using chlorine bleach.  Being green in this case appears to come at a cost, to your wallet and to the environment.

Omaha, United States
about 4 years ago

All produce just needs to be washed before you eat it. If you are cooking it, no need to wash it, but I do just the same.


Coquitlam, Canada
about 7 years ago

Or You could just spend a couple extra bucks on a couple of high quality thin reusable bags and wash them regularly. And their easier to keep in your pocket.

If you read this story carefully, you will see it is most likely written on behalf of the plastic bag manufacturers.

Like this quote:
In addition the new HST tax in Ontario adds even more to the cost of the once free, safe and hygienic plastic gr

robertsgt40
Texas
over 11 years ago

Yep. Can't be too green. All this as the Gulf Of Mexico is knee deep in oil and Corexit. Nice balance. Won't even mention "depleted uranium"

If you wash your hands after a big shopping trip at a store like Walmart it's amazing how filthy they are. The soap turns grey. Re-using bags will just keep adding layers of filth to the products you buy.

Doug Diggler
Univ. of AZ
over 11 years ago

Of course, you could always wash your fruits and vegetables while preparing them. No need for alarm, folks.

sean
Lindsay, Canada
over 11 years ago

Some stores say they give the money for plastic bags to charity. If that is the case why don't they issue a charitable donation receipt and why is there tax charged on top of the $0.05/per bag?