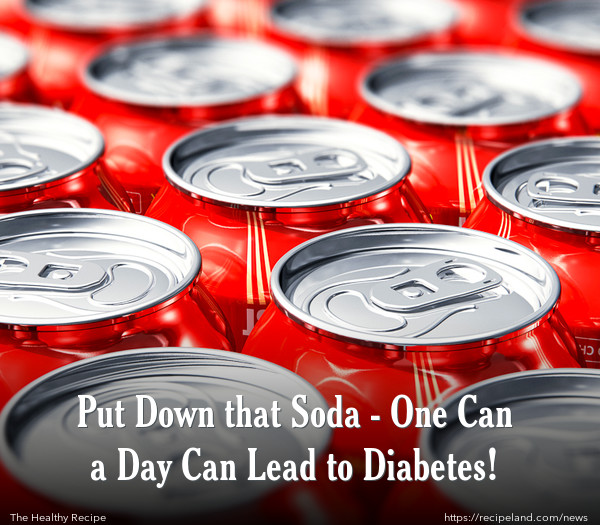 Researchers collected information on over 28,000 people who drank sodas from the United Kingdom, Sweden, Spain, France, the Netherlands, Italy, Germany and Denmark. They found that the risk for developing type 2 diabetes increases by over 20% for people who consume just one sugar-sweetened soda every day.

Still, that is quite a substantial increase in diabetes risk with these other factors being accounted for.

The study results were published in the diabetes health journal called Diabetologia in April 2013. The article stated that there is a definite link between drinking even small amounts of soda, but could not prove a direct cause and effect relationship between soft drink consumption and diabetes risk.

Dora Romaguera, of London’s Imperial College, stated that “Given the increase in sweet beverage consumption in Europe, clear messages on the unhealthy effect of these drinks should be given to the population.”

These findings support studies showing that people raise their risk of type 2 diabetes by up to 25% due to sugary soda consumption in the United States – and the similarities do not end there.

Harvard researchers released their findings at the 2013 American Heart Association meeting in New Orleans, showing that death rates caused by drinking sugar-sweetened soft drinks are due to the increased cases of heart disease, cancer, as well as diabetes.

“The research does not directly implicate sugary drinks as the cause of the deaths. Instead, it establishes a statistical link. It means that people who drink the most sugar-sweetened beverages also tend to have higher rates of chronic diseases—especially type 2 diabetes, which occurs when the body has trouble processing sugar in the bloodstream. Chronically high blood sugar contributes to cardiovascular disease and cancer. It also directly damages the body, including the heart, blood vessels, and brain.”(1)

The health risks associated with drinking a little sugar-laden soda may also be caused by sugar-free alternatives. Diet soda has also been linked to an increased type 2 diabetes risk.

Yet another study in the U.S. found that: “Adults with diabetes reported drinking three times as much diet soda as adults without diabetes.”(3) This may simply be because diabetics have to drink the sugar-free option.

But with so much research available on both sugary and diet sodas, it seems clear that consuming any kind of soft drink on a regular basis is not a healthy choice.

You may be wondering why this is the case. Why wouldn’t sugar-free soda be better for you?

Diet sodas are usually artificially sweetened with aspartame. Even through aspartame is sugar-free, it still has a similar effect on the body that sugar does. It can increase blood sugar (glucose) levels and possibly even insulin levels, especially if you drink a lot of it.

The best choice for your long term health is to pass up soda for a glass of water, herbal tea, or even club soda flavoured with a splash of natural fruit juice.

Contrary to the misinformation touted here, diabetes isn’t caused by the consumption of any one food, beverage or ingredient. It’s a complex health condition with numerous risk factors such as age, genetics and obesity, according to the American Diabetes Association: http://bit.ly/1wBVtoh. According to the nation’s leading authorities on diabetes treatment and prevention, millions of people can avoid or delay Type 2 diabetes by losing weight through diet and exercise. This should be the prevailing takeaway, as opposed to demonizing any single source of calories. --American Beverage Association