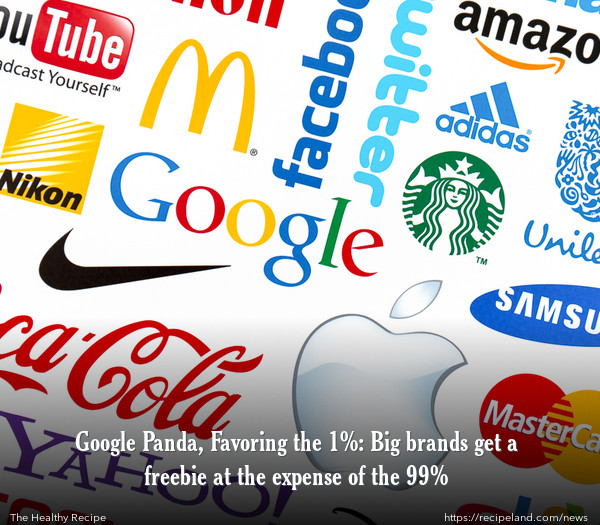 It is with great regret and conflict that they are now forced to cancel the sponsorship of needy children around the world.

They are not alone, reports of numerous websites have been laying of thousands editors and writers as they have seen their once steady traffic dry up after Google Panda was implemented. Panda, apparently was attempting to fight the growing legions of content farms. Sites that generate huge amounts of low quality content An Endless Sea of Garbage.

One well documented creator of this type of “content” is Demand Media who once vowed to create a million pieces of “content” each month.

Demand Media attempted to acquire RecipeLand.com in early 2008 and had made a generous offer of over 10 times yearly revenue.

“They had no interest in the content or user experience whatsoever. They only wanted to buy the traffic to help legitimize their other properties.” says Sean Wenzel, founder of RecipeLand.com. “There was no way I was going to sell out our visitors. I had trust and faith that at some point they [Google] would find a way to filter out the crap and we would still be there. Heck, we'll just keep running the web site, and in 10 years we'll have made the same revenue that was offered.”

After all, Recipeland survived the dot com meltdown. In their 15+ year history they had seen literally dozens of ad networks startup and then fail and had weathered thousands of previous updates to Google's massive search algorithm.

Google's Panda algorithm changed that. February 24th, 2011 US traffic dropped over 40%. Then on April 11th, when Panda was rolled out globally they witnessed another 50% drop in overall traffic for a total decline of nearly 75%.

They made a huge number of changes according to Google's cryptic guidelines for quality content, reported to Google's official Panda thread and followed suggestions made to other sites that were inadvertently affected (and recovered) such as blocking Google from indexed thousands of pages and other suggestions such as in daniweb's post (another website that was Panadalyzed). Recipeland decided it was a great opportunity to thoroughly review the entire site and make improvements to the overall quality.

The last quarter of the year is Recipeland's biggest traffic season. With all of their changes combined with Google tweaking the Panda algorithm, combined with the positive decade long history and trust of the site (since before Google even existed) would the Panda penalty would be lifted?

No, this was not the case.

Many of the recommendations improved rankings with Google only slightly and more so with Bing & Yahoo (20% of the search market share).

It seemed Recipeland was on the right path. There were many suggestions floating around Google webmaster forums to block internal search results. The idea being that since Google is a search engine they don't like the competition and apparently engage in anti-competitive behavior by penalizing sites that provide their own search type results.

When they began experimenting with blocking their search results pages (with noindex tags) they actually dropped further down in Google ranks and nearly vanished from Bing and Yahoo. At the same time those search pages create 100's of thousands of extra pages for Google to index and Recipeland worries that those pages may make their site appear like a content farm to Panda. Many of those same search results pages are actually the most favored landing pages when visitors use Google in search of recipes.

Asked if he still has trust and faith in Google search, “No. We've seen a Google search for recipes rank 'Viagra Spam recipes' 100's ahead of legitimate recipe web sites including us. There's a clear favoritism to big brands, it's like they've been granted a free pass. There's shallow and thin content sometimes not even related to recipes that ranks so well it boggles the mind. There also seems to be a trend to less is more. Less content, more brands.” says Sean.

“There's so many non-recipe web sites ranking in the top 100 or so that the searcher will simply get frustrated and focus on the top 3 or 4 actual recipe sites run by large media conglomerates. It's like there's a war on against independent sites.”

Q. “Do you regret not selling out to Demand Media?”

A. “It certainly seems foolish rejecting their offer now. I should have realized that as Google grew they would be forced to begin favoring big oil [brands].”

Q. “What's the biggest impact that you see on the user experience?”

A. “For recipes, people are being misled into believing that's all there is. A few massive media conglomerate run recipe sites. They look at the next page and find packaged consumer goods, brands and self-promotional sites unrelated to recipes. It makes sense they will then think that's all there is and return to the top 3 or 4 when there are hundreds of independent recipe sites many with great content, 30 to 50 pages down the results. People are being misled.”

Q. “What has been the hardest part after being “Pandalyzed”

A. “Calling World Vision and canceling the child sponsorships, we just can't afford it anymore. We thought about writing them [the kids] but how do you explain after years of sponsoring them you have to cancel. It's as if we've been given concrete shoes and have to go swimming.”

We decided to check into Google's top 20 links to see how the highly competitive term “recipes” fares and analyze the alleged favoritism towards big brands. When we performed the search we were not logged in to any Google account that might “personalize” the results.

70% of the results lead to big brand media conglomerates

35% are duplicates , that is multiple results for the same site, typically listed on after the other

Here's a complete breakdown of the results we received.

Reviewing the search results beyond the top 20 to top 100 you see even more brands with favorable rankings.

Cheerios.com and Kellogs.com for instance, rank high up the list. Is this a reflection of today's economy where many are having to eat breakfast cereal for dinner? It seems unlikely considering the high cost of packaged consumer goods such as breakfast cereal.

And how about Wikipedia's definition of what a recipe is? Millions are probably searching “recipes” each day to discover what the definition of recipe to help enrich their vocabulary. Of course this ranks well before they find results for the hundreds of dedicated independent recipe web sites (10 or 20 pages down the list) that appear to have be pandalyzed.

The higher ranking results in the top100 are filled with self promotional websites such as alaskanseafood.org, hersheys.com, advocado.org, godiva.com, honey.com and even montereybayaquarium.com. Perhaps Google's metrics have shown the user is not smart enough to look for seafood, advocado, or aquarium (?) + recipes instead of “recipes” and that algorithm determines it is likely the user would not want to see general recipe websites.

The most puzzling of the higher ranking results include The Center for Disease Control recipes page and even more odd xkcd: Recipes.

Xkcd: Recipes link has no recipes whatsoever, actually there's almost no text on the page beyond the following:

It does however have the word “Recipes” in it's H1 tag.

This seems to be what Google's search algorithm combined with Panda consider to be “high quality, relevant content”. The internal metrics driving the algorithm at least have a sense of humor.

So who wins with Google Panda?

Hands down, the 1% wins and they are winning in a big way. Competition is being put out of business, irrelevant results on page 2 to 10 will drive users back to the first page where there are a few media conglomerate recipe sites and they get the traffic.

The top search results are looking more and more like walking through the mall or watching a cable TV commercial break. With favoritism being offered to big brands in search results via Panda it's looks like it is becoming increasingly weighted against the individuals that have spent years painstakingly culling, editing content by hand.

Reviewing this top 100 one might think that Google is helping big brands with their own version of a bail out package. Isn't it the banks that need bailouts to protect their bonuses? Most of the big brands being represented in the search engine rankings have healthy balance sheets.

Initially the Internet and Google's strong willed independence to deliver search results unfettered by advertising looked as if they would level the playing field and allow fair competition to be reached by anyone who wanted to hand-craft quality content to reach an audience. In doing so a sense of trust and loyalty synonymous with the Google brand.

In a sense that trust was gained by delivering the American dream back to Americans, free from monopolization so that the 99% could compete based on individual merit.

Now that search results are monopolized by Google it is even more important that the playing field is level and competition is open to all. Unfortunately for the user, in the particular case of “recipes”, it seems the Google search results post-Panda has clearly created a playing field vastly slanted in one direction and it seems in this case it's leaning away from users so they slide down the field into the waiting arms of the big brands. Heck, who needs a recipe anyway, it's printed on the side of the box.

In an effort to be fair, Panda has certainly help reduce the burden of the Internet search and numerous content farms have been targeted just as the quality websites have been. In the case of “recipes” it's quite clear there's no need to look beyond page 1. You will just find 10 pages of the same.

In fact there's recent reports that Google has been caught buying paid links (again), a strict no-no that can cause your website to be manually blacklisted by Google from search results. The problem seems to be that their marketing company encouraged the creation of “a tremendous amount of junk content indexed by Google”.

Interestingly the Google Chrome video that was promoted, promotes King Arthur Flour which happens to have high rank on a search for “recipes”. Go figure...


Davidsonville, United States
over 9 years ago

Your article is spot on! I operate an independent web site for a brand name hotel for the past 10 years-- I cant get listed past many of the big travel sites. Google has ruined the web. Their core principles of "focus on the user" etc are a bunch of crock.

This is now an excellent article everyone at Google should read.

I just searched Google for "wild rice meatballs" and the top 7 results all led to similar recipes on the exact same web site. How can that be good for the user experience?