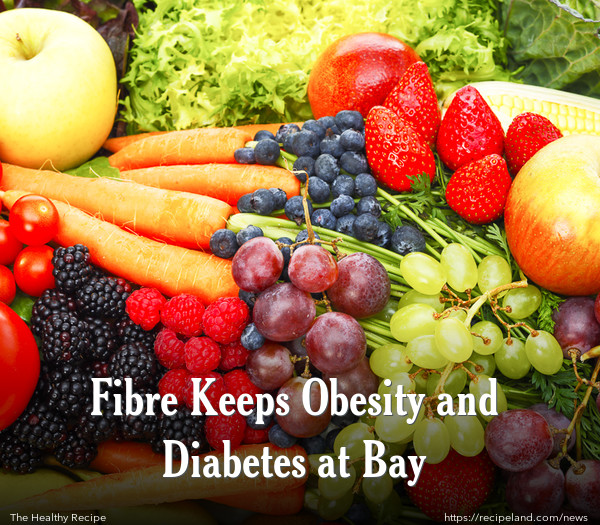 By now, nearly everyone knows that fibre is good for you. But, do you realize just how important it is for preventing obesity and diabetes? A recent study confirms the connection.

Many research studies have confirmed that animals who consume a diet that is rich in fibre from fruits and vegetable are not only less fat, but they are far less likely to develop chronic health problems like diabetes.

But, recent studies have revealed that just because a person (or animal) is thin, this does not necessarily mean that they have the healthiest bacteria growing within their gut. As it turns out, your health is directly affected by how much fibre is in your diet.

This recent study looked at mice and rats who were given plenty of fermentable fibre-rich foods, which were further enhanced by propionate and butyrate (these happen to be two of the types of fatty acids that are produced when soluble fibre is digested in the gut).

Some of the foods that were included were Brussels sprouts, beans, avocado, fruits and vegetables.

Two other groups of mice and rats received different diets, one with a fatty, sugary diet that included extra fibre, and another group which received a diet overloaded with fat and sugar.

Results of the study showed that the mice and rats that were provided with the fibre-enhanced diets gained less weight than those who did not receive the fibre in their diets.

These same mice and rats also tended to have a lower incidence of diabetes. The mice and rats that received the diet that was not only enhanced with fibre but also included the gut bacteria had greater protection from developing diabetes, since their insulin levels were better controlled than it was for their control group counterparts.

Researchers attempted to experiment with mice who had no ability to naturally generate glucose, and these mice showed weight gain and development of diabetes. This further confirms the way that fibre and glucose in your gut are both necessary to prevent obesity and diabetes.

Although this is the first study of its kind, relating gut bacteria to the consumption of fibre, it is clear that these results are not limited to rats and that people can experience the same metabolic benefits.

Despite the fact that humans cannot properly digest many of the fibres in some foods, the bacteria that is contained within our guts can do so, and it is helpful for metabolism and weight control.

Time to step away from the fatty, sugar filled fast foods and turn toward fibre-rich fruits, vegetables, beans and more to control weight and prevent diabetes.