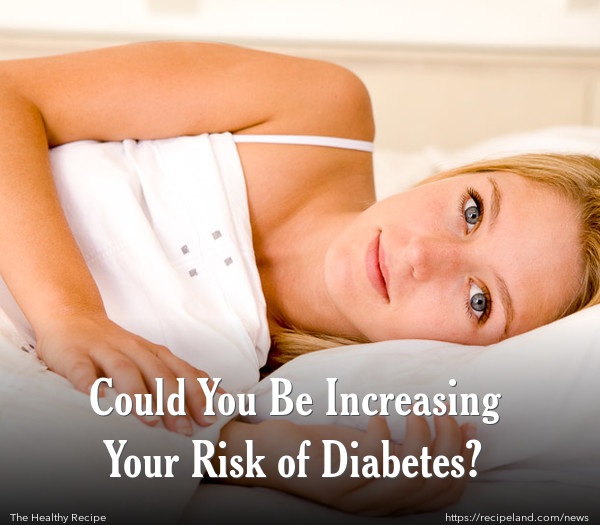 If you struggle to fall asleep, then you are already frustrated. But, it is important to know that sleep problems may not only make you tired and irritable, but they may increase your risk of developing type 2 diabetes.

The study, conducted at Harvard’s T.H. Chan School of Public Health, found that after excluding other diabetes risks such as BMI and hypertension, women who had difficulty falling asleep had more than a 20% increase in diabetes risk. Frank B. Hu, M.D., Ph.D., a professor of nutrition and epidemiology, and co-author of the study, studied surveys from more than 133,000 women between 2000 and 2011. Hu states, “Sleep difficulty itself may have biological effects, like increased stress hormone, which has been associated with increased insulin resistance. Or sleep difficulty may be related to stress, which may contribute to increased risk of diabetes.”

There are other problems that come with a difficulty to fall asleep, which may also affect your health. The women who reported sleep difficulty as well as at least three other sleep problems, such as snoring, sleep apnea, working overnights, or getting less than 6 hours of sleep per night, were 400 times more likely to develop diabetes. Having only one of these risk factors increased the risk by nearly 50%, as compared to women reporting no sleep issues. According to Hu, “Bottom line, both sleep quality and quantity are important for the prevention of diabetes.”

Don’t be too alarmed at this point, because there is some good news, too. You certainly don’t have to worry about the occasional rough night’s sleep. Robert Rosenberg, D.O., medical director at the Sleep Disorders Center of Prescott Valley, Arizona, states, “A couple of nights of not getting enough sleep isn’t going to do much.” The problems come for those who have chronic issues with poor sleep or lack of sleep.

A separate recent study found that, when it comes to an increased risk of diabetes, you can actually catch up on your sleep if your problems are more occasional than chronic. This small study examined sleep patterns of 19 men, and restricted their sleep to only 4-1/2 hours for 4 straight nights. They measured the insulin sensitivity of the men, and found that the risk of diabetes had increased. However, after two nights of good sleep, averaging 9-1/2 hours, their levels returned to the normal levels. It should be noted that this study was small and conducted under strict laboratory settings, so the results cannot yet be generalized. But, these results do show some promise when it comes to reversing the effects of poor sleep and the risk of diabetes.

For best health, Rosenberg states, “Get the electronics out of the bedroom 60-90 minutes before bed and go through a more relaxing routine, whether that’s meditation, listening to music, reading—it should get you into a state where you are ready to go to sleep.” Sticking to a regular routine and using good sleep hygiene can help tremendously.

If you are following a good sleep schedule and good sleep hygiene but you still feel super tired and groggy, then you should talk with your doctor about possible causes. Hu states, “Doctors should ask whether patients have any sleep problems, whether they sleep too much or not enough, whether they snore with regularity or have difficulty falling asleep or maintaining sleep. Those are relatively simple questions doctors can ask that can be very helpful in terms of advising patients about potential preventative strategies for reducing risk of obesity and diabetes.”

Make sure you are staying healthy by maintaining a good sleep schedule and good sleep habits!