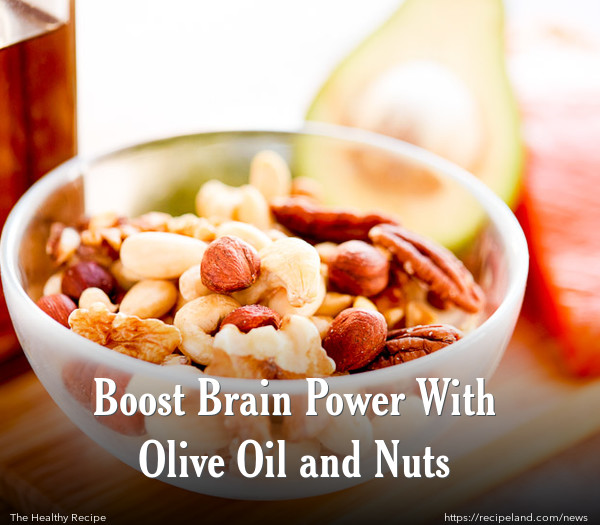 A recent study showed that a Mediterranean diet, with additional olive oil or mixed nuts added in, may improve brain power and help to slow the aging process even better than a traditional low fat diet.

People in Spain and Italy who use large amounts of olive oil instead of less healthy fats show better brain function as they age. Although fewer people in southern Europe follow a traditional Mediterranean diet, it is thought to help increase heart health and decrease the risk of cancer because of the large amounts of fruits, vegetables, fish, nuts, whole grains and healthy fats that are consumed, and the low amounts of red meat and dairy products.

A recent study showed that the Mediterranean diet is not only heart healthy and protective against certain cancers, but those who consume more olive oil and nuts show higher scores on memory and attention tests, and tend to be better abstract thinkers.

The study, conducted as part of a study examining high risk heart patients, took place at the Prevencion con Dieta Mediterranea (PREDIMED). There were 447 male and female participants, with an average age of 67. All participants were evaluated and considered to be “brain healthy” at the onset of the study. The participants were divided into three groups, with 155 people in a group that consumed a standard Mediterranean diet with one additional litre of extra virgin olive oil per week, 147 people consumed 30 grams per day of mixed walnuts, hazelnuts, and almonds, along with a standard Mediterranean diet; and the third group, which consisted of 145 participants who consumed a traditional low fat diet that is often recommended for prevention of heart attack and stroke.

Participants followed these diets for a period of four years. At the conclusion of the study, cognitive testing was performed to assess any decline that may have occurred during the test period. Memory, working memory, attention, and abstract thinking skills were all assessed.

There were 334 total participants that endured the entire study. Of those participants, data showed 37 cases of mild cognitive impairment, or a more severe type of memory loss than what typically accompanies aging. Results were reported in the online journal, JAMA Internal Medicine.

Emilio Ros, M.D., of the Institut d'Investigacions Biomediques August Pi Sunyer, Hospital Clinic, in Barcelona, stated, “Our results suggest that in an older population a Mediterranean diet supplemented with olive oil or nuts may counter-act age-related cognitive decline. The lack of effective treatments for cognitive decline and dementia points to the need of preventive strategies to delay the onset and/or minimize the effects of these devastating conditions. The present results with the Mediterranean diet are encouraging but further investigation is warranted.”

Simon Ridley, M.D., or the Alzheimer’s Research UK, stated, “‘The results of this trial appear to be encouraging but the effects seen were very subtle and as the researchers themselves point out, more work is needed to understand these findings fully. It’s important to note that the people in this study did not have dementia, and this trial does not tell us whether a Mediterranean diet could prevent the condition. These findings suggest a need for much larger trials to understand better the effects of changes in diet on memory, thinking and dementia risk. While there is currently no certain way to prevent dementia, evidence suggests the risk can be lowered with a healthy lifestyle including a balanced diet, regular exercise, not smoking, and keeping weight and blood pressure in check.”

For those who enjoy Mediterranean foods, olive oil, and nuts, this is great news!