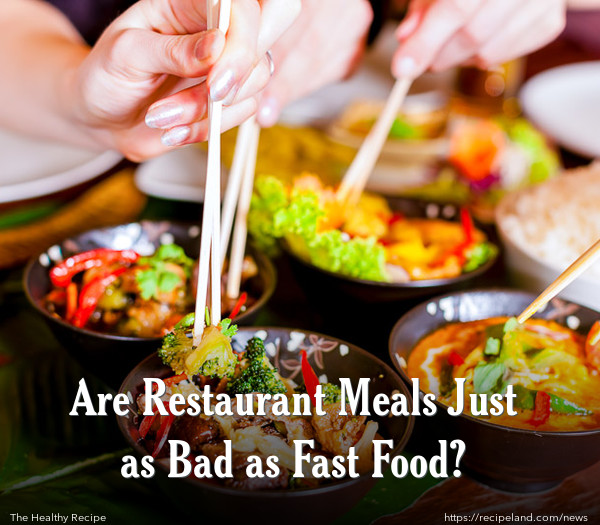 Do you think you are avoiding unhealthy choices by opting for restaurant meals instead of fast food? This might not always be the case.

A recent study conducted by the University of Illinois examined data from more than 18,000 Americans related to their habits when dining out. Lead researcher Ruopeng An concluded that restaurant meals contain, on average, 200 more calories than meals you may consume at home. The data was collected over a period of time ranging from 2003-2010, and published in the European Journal of Clinical Nutrition.

While restaurant dining may appear on the surface to be healthier than fast food options, and you may actually get more nutrients like vitamins, potassium, and omega-3 fatty acids, these restaurant meals are typically overflowing with sodium and cholesterol. Researchers explained that this may be a result of overeating in a restaurant because of larger portions.

An stated, “dietary behaviour is influenced by eating environment” and that various factors including the fact that diners spend longer times in regular restaurants, and may take advantage of the many choices available which can contribute to higher caloric intake when dining at a full-service restaurant.

Another research study, which was published in the Public Health Nutrition journal found similar results, and added that those with middle incomes as opposed to higher incomes, and black adults, tended to take in more calories at restaurants.

Previously, research had shown that meals served at individual and small-chain restaurants (which accounts for approximately half of all restaurant locations in America), provided 2-3 times the appropriate caloric requirements for an adult.

This data, which was published in the JAMA Internal Medicine in May 2013, analyzed 157 full meals with side dishes from 33 different restaurants and found that the average meal contained an overwhelming 1,327 calories. Italian restaurants were among the worst offenders, offering meals that averaged 1,755 calories. American meals averaged 1,494, while Chinese food averaged 1,474 and Vietnamese came in around 922 calories per meal.

This amount of calories should frighten you. It is very high, if you are trying to follow a healthy diet. While the average daily recommended amount does vary based on age, gender, and lifestyle, men should take in 2,000-3,000, and women should take in between 1,600-2,400 per day.