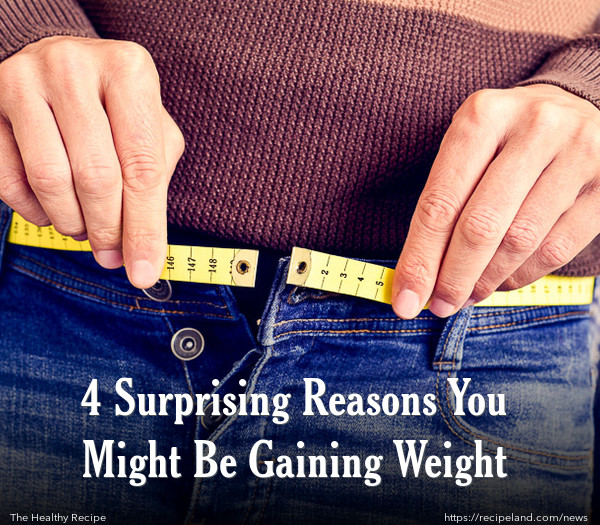 For most people, the obvious answer when weight gain occurs is that they are not eating right or exercising enough. But, there might be other things that could be causing you to pack on some extra pounds.

Here are four reasons that can cause weight gain that might surprise you.

Those who have problems with their significant other may be more likely to gain weight. A recent study found that when couples fight with hostility they release higher levels of hunger hormones, which ultimately led to making poor food choices. A study conducted at the University of Delaware followed 43 couples and their hormone levels. The couples were instructed to eat a meal together and discuss their differences.

Researchers observed and rated the discussions, which frequently became arguments. Those couples who used the most hostile language had the highest levels of hunger hormones, specifically ghrelin. These couples were more likely to make food choices that contained higher levels of sodium and unhealthy fats. Lisa Jaremka, Ph.D., an assistant professor at the University of Delaware, stated, “The findings suggest marital distress may be an important factor for weight gain.”

2. Consuming too much iron.

Those who cut back on eating red meat in an effort to control their calorie intake tend to have lower levels of hunger hormones. When you eat red meat, the amount of iron that you consume can adjust the body’s release of hunger hormones, and perhaps cause you to eat more than you intended.

Donald McClain, director of the Centre on Diabetes, Obesity, and Metabolism at Wake Forest School of Medicine, studied the effect of iron on the appetites of mice. He fed the mice either high or low protein diets, and monitored their levels of leptin, which is a hormone that suppresses appetites. After following the diet for two months, the mice demonstrated a 42% drop in their leptin levels when they were on the low iron diet.

This led McClain to conclude that the current iron recommendations, which are 18mg per day for women ages 18-50, and 8mg per day for women over 50, might be higher than necessary. When you consume more than one pound of red meat per week, you could raise your leptin levels high enough to alter your appetite. Other sources of iron, such as spinach and beans, do not have the same affect.

3. You blame your genetics.

While you may be more likely to gain weight if your family struggles with obesity, one of the major issues is the fact that those with overweight family members believe that they are destined for the same fate.

Michael C. Parent, Ph.D, assistant professor at the Department of Psychological Sciences at Texas Tech University, examined the beliefs of research participants about the genetics of being overweight.

Three years later, Parent found that those who strongly believed that genetics were the cause of their weight gain were more likely to be overweight. These participants were more likely to make poor food choices and not engage in enough physical exercise. Parent explains, “There is no direct genetic cause for obesity,” and he stresses the importance of diet and exercise to control your weight.

Many people find this to be a frustrating truth, but it does get harder to control your weight as you get older. A recent study published in Obesity Research and Clinical Practice found that people will gain more weight even when they consume fewer calories as they age. The current generation is gaining weight at a more rapid rate than people did 40 years ago.

Researchers examined more than 36,000 adults, and followed them for 38 years. They compared diet, activity, and weight patterns.

Jennifer Kuk, a professor of health and sciences at York University in Toronto, determined that an adult who consumed the same number of calories in 2008 as their 1971 counterpart is about 10% heavier. Kuk stated, “Again, we’re finding that weight management is much more complex than just energy in versus energy out.” The solution is still diet and exercise.

Worried about how to lose weight? Understanding some of the unexpected causes can help you get on track. But, in the end, eating right and getting enough exercise are all the secrets you need to know.