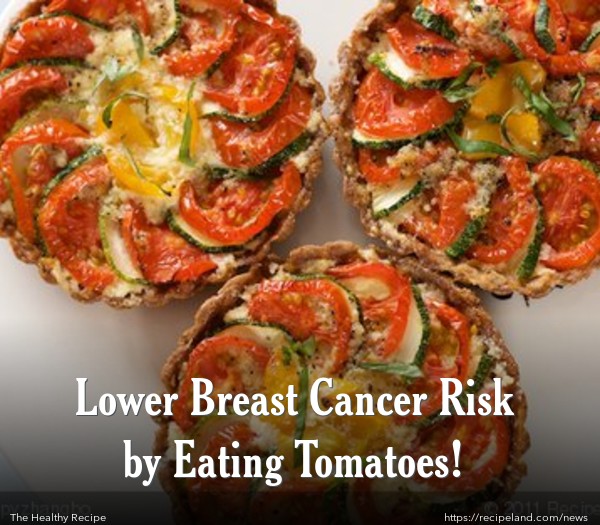 One of the reasons that the risk of breast cancer increases with women’s age and onset of menopause is that their body mass tends to increase.

Eating tomatoes has been shown to have a positive effect on balancing the hormones that regulate sugar and fat metabolism, so this may result in a reduced risk of developing breast cancer when a woman reaches menopause.

A joint research effort between the Ohio State University Comprehensive Cancer Center and Rutgers University that was published in the Journal of Clinical Endocrinology & Metabolism studied 70 post-menopausal women for 20 weeks, evaluating the effects of both tomato-rich diets as well as soy-based diets.

At the end of the study, it was found that the levels of adiponectin (a hormone that is considered to be partially responsible for helping to keep blood sugar levels regulated, as well as help to control levels of fatty tissue in the body) had increased nearly 10 percent.

Those with a lower body mass were shown to have even greater increases in this hormone level. Interestingly, the results were noticeable, even when tomatoes were not consumed on a long term basis.

Says Adana Llanos, Ph.D., MPH, one of the authors of the study, “Eating fruits and vegetables, which are rich in essential nutrients, vitamins, minerals and phytochemicals such as lycopene, conveys significant benefits. Based on this data, we believe regular consumption of at least the daily recommended servings of fruits and vegetables would promote breast cancer prevention in an at-risk population.”

Those women who consistently maintained a healthy body weight showed even greater effects, with the adiponectin levels being higher. This further confirms the importance of obesity prevention.

During the period of soy protein consumption, the subjects’ adiponectin levels tended to drop.

Although consuming a diet that is rich in soy products has often been thought to lead to lower breast cancer rates, as Asian women tend to have a lower incidence of breast cancer compared to other nations, but the connection is not clear at this point whether there is a connection with the adiponectin levels.

Further information, such as the importance of choosing organic tomato products that do not contain pesticides or other chemicals, choosing the best varieties and opting for fresh tomatoes whenever possible, will help to boost the adinopectin levels further.