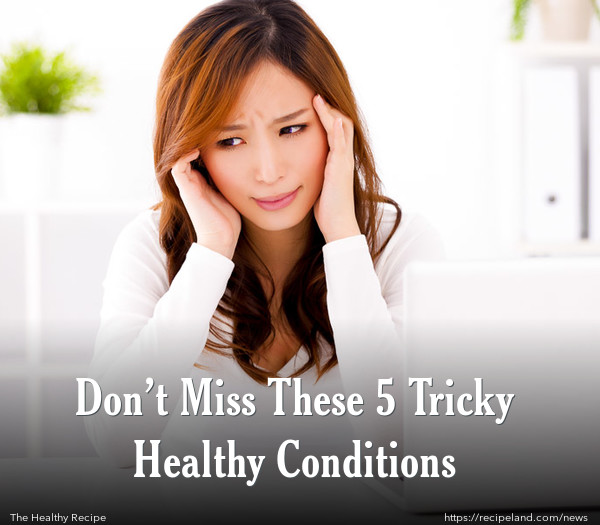 Have you had confusing health symptoms lately? Perhaps more frequent headaches than usual. A suspicious rash? A lump or pain in different areas of your body? Don’t ignore these symptoms, even if they may seem mild and aren’t giving you too much trouble.

Certain health conditions may be fairly simple to diagnose based on some specific symptoms, but it is always important to see your health care provider before jumping to any major conclusions. Even doctors can become confused, and clear diagnosis is important.

A recent study published in the BMJ found that approximately 1 out of every 20 people are misdiagnosed, which can lead to mistreatment and even bigger problems. Here are the 5 conditions that are most commonly misdiagnosed.

Sleep deprivation can make you cranky and irritable, which are symptoms of depression. But, those with sleep apnea, who are chronically sleep-deprived, can show major symptoms of depression. A recent study showed that nearly 75% of people with sleep apnea experience depressive symptoms, which can be serious enough to include self-harm and suicidal thoughts. After being properly treated for sleep apnea, the symptoms for nearly all of those people disappeared. For those with depression, the feelings of sadness or hopelessness, the lack of energy, and the anxiety, are quite common and can often mimic other conditions including thyroid problems, bipolar disorder, vitamin D deficiency, and even low blood sugar.

Celiac disease may seem simple to diagnose, when foods containing gluten cause problems, but it is actually a problem that can take years to accurately diagnose. One of the problems with making the diagnosis is that the symptoms are so similar to many other gastrointestinal problems. There is no single conclusive test to diagnose celiac disease correctly, and irritable bowel syndrome is often an interim diagnosis until doctors truly know what the problems stem from. According to the National Foundation for Celiac Awareness, nearly 85% of Americans with celiac disease are not properly diagnosed or are diagnosed with other conditions.

For those under the age of 50 presenting with limb numbness, difficulty speaking, and blurred vision, a diagnosis of migraine, vertigo, or even alcohol intoxication may be made. Research from the American Heart Association found that for stroke patients between the ages of 16 and 50, nearly 15% were released from the hospital because the doctors diagnosed them with a headache or intoxication. Researcher Seemant Chaturvedi, M.D., stated, “These patients did not get proper treatment due to misdiagnosis.” Chaturvedi explains that emergency room doctors do not expect to see strokes in patients under the age of 45, and full testing may not be done. In reality, a stroke can occur at any age.

More than 50 million Americans are diagnosed with arthritis, according to the Centres for Disease Control and Prevention. However, it is important to know that fibromyalgia can also result in painful, swollen joints. Patients with fibromyalgia have whole body pain, headaches, sleepiness, and gut problems. If the pain does not remain in one area, and cannot be accounted for by other conditions, it may be fibromyalgia and not arthritis.

Symptoms of fatigue, headaches, and joint pain are related to both multiple sclerosis and many other conditions, including Lyme Disease, fibromyalgia, and even the flu. A recent study showed that more than 75% of women with Lyme Disease had symptoms that mimicked other conditions, including multiple sclerosis. It’s important that thorough testing be conducted for an accurate diagnosis.

If you have mysterious health symptoms, be sure to see your doctor and get an accurate diagnosis so that you may receive appropriate and timely treatment for your health condition.