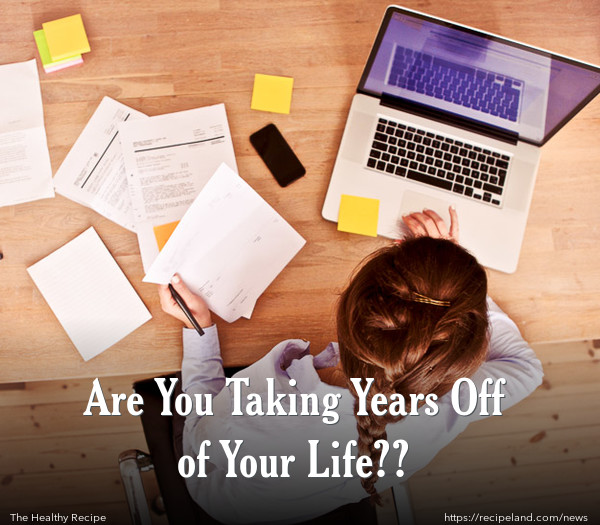 So you think you follow a healthy lifestyle? You eat healthy foods, get enough exercise, and avoid taking too many risks. Well, you may need to pay attention to a few more things if you want to avoid taking unexpected years off of your life.

Here is a list of 5 things that you might do on a daily basis that could be taking years off your life, and you are not even aware!

When you really put your taste buds on high alert, you are actually decreasing your risk of death. A Chinese study followed the eating habits of over 3 million people for 7 years, and concluded that those who ate spicy foods nearly every day had nearly 15% lower risk of death, as compared to people eating spicy foods once or less per week. The main ingredient in chili pepper, capsaicin, helps to prevent many health conditions, including obesity, cancer and hypertension. It has antioxidant properties and anti-inflammatory properties, as well.

Down time is certainly important. But, if you are having better relationships with television characters than real humans, you could be risking your health. A recent study published in Perspectives on Psychological Science found that those with fewer social connections are at a higher risk for an early demise. The study reviewed 70 previous studies and concluded that those who are lonely have a 26% increase in their risk of premature death. Living alone gives a person a 32% increased risk. The risks associated with social isolation and loneliness are similar to the risks of death associated with obesity.

While sitting is often unavoidable in the workplace, unless you work somewhere super progressive and use standing desks, you are risking your health. Too much time in front of a computer can increase your risk of early death. A recent study published in the Annals of Internal Medicine found that sitting time (whether working, reading, watching television, or whatever) increased the risk of death from cardiovascular disease as well as type 2 diabetes. Another recent study published in Cancer, Epidemiology, Biomarkers & Prevention found that the most common form of cancers associated with sitting included multiple myeloma, invasive breast cancer, and ovarian cancer.

4. Your commute is too long.

One of the things that is at least as bad for you as sitting too much is having a long commute. Research recently conducted in the Dallas-Fort Worth area of Texas (chosen because its rate of congestion requires far longer commutes for many) found that long commutes resulted in less physical activity, which increased blood pressure significantly. The study, which was recently published in the American Journal of Preventive Medicine, found that commutes that exceeded 15 miles were associated with higher levels of body fat and higher BMIs. Those who have longer commutes experience more stress, fatigue, anxiety, depression, and social isolation, as well, which can all contribute to premature death.

5. You are not getting the right amount of sleep.

Many people fail to get enough sleep, but, interestingly, getting too much sleep is just as bad for you. If you don’t get the right amount of sleep, your entire system can be thrown off. A recent study published in the journal Sleep reviewed 17 studies to determine the healthiest amount of sleep. Those who slept fewer than 7 hours per night, compared to 7-8 hours, had a 12% increase in the risk of death. Those who slept more than 9 hours per night increased their risk of death by nearly 30%. If you are getting too much or too little sleep, you should consult with your doctor to determine whether or not you have any underlying problems that are contributing.

Taking care of yourself means more than eating right and exercising. Make sure that you kick these 5 unhealthy habits today, if you want to live longer!