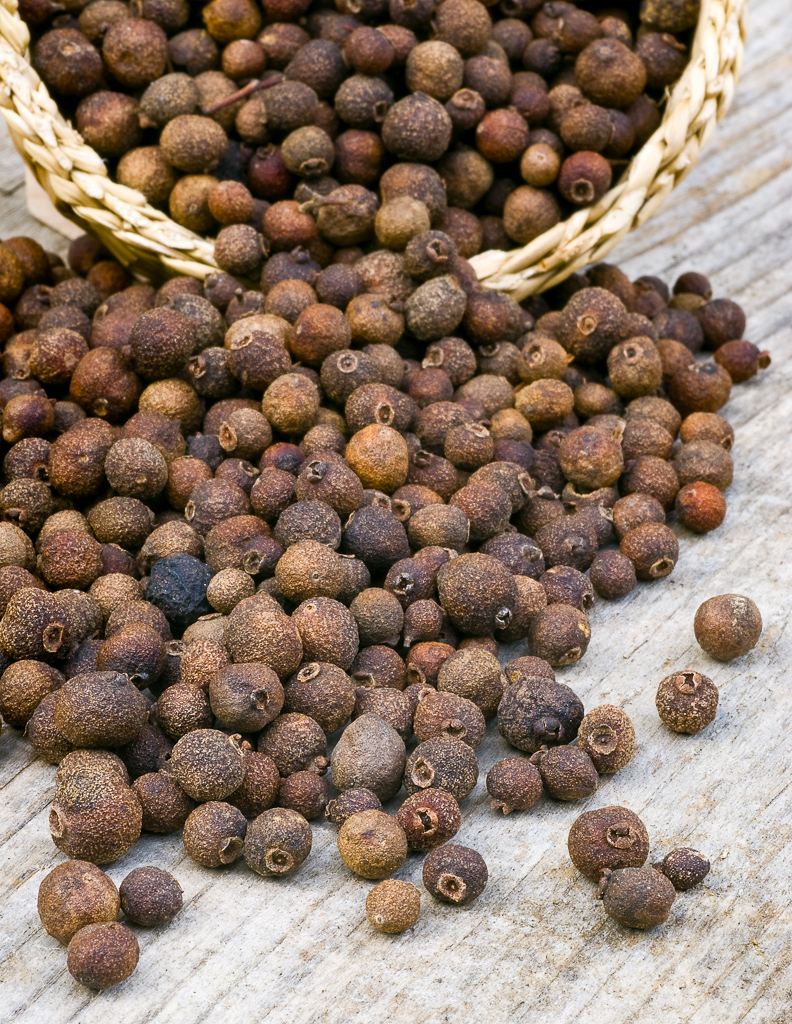 Allspice is the dried, unripe berry of Pimenta dioica, an evergreen tree in the myrtle family. After drying, the berries are small, dark brown balls just a little larger than peppercorns.

Allspice is the dried, unripe berry of Pimenta dioica, an evergreen tree in the myrtle family.

After drying, the berries are small, dark brown balls just a little larger than peppercorns.

Allspice is used in Jamaican jerk seasoning and in Jamaican soups, stews, and curries. It also is used in pickling spice, spiced tea mixes, cakes, cookies, and pies. Food producers use it in ketchup, pickles, and sausages.

Allspice is pungent and fragrant. It is not a blend of "all spices," but its taste and aroma remind many people of a mix of cloves, cinnamon, and nutmeg.

Christopher Columbus discovered Allspice in the Caribbean. Although he was seeking pepper, he had never actually seen real pepper and he thought Allspice was it. He brought it back to Spain, where it got the name "pimienta," which is Spanish for pepper. Its Anglicized name, pimento, is occasionally used in the spice trade today. Before World War II, Allspice was more widely used than it is nowadays. During the war, many trees producing Allspice were cut, and production never fully recovered. Folklore suggests that Allspice provides relief for digestive problems.

The warm sweet flavor of Allspice lends itself to a wide variety of foods. Allspice is commonly used in both savory and sweet foods.

Aromatic whole Allspice is a great addition to potpourri. Add a few Whole Allspice to your pepper grinder, along with a mixture of black, white, and green peppercorns for a unique seasoning blend. For an intriguing spiciness, add whole, cracked berries to marinades for chicken and pork, simmering beef stew, pot roasts, or hearty bean soups.

Enhance simple desserts such as applesauce, fruit compotes, and oatmeal cookies with the warm, sweet flavor of Ground Allspice.

Add a pinch of Ground Allspice to barbecue and tomato sauces as well as cooked winter squash and carrots.

Allspice may be substituted for cloves.

To grind Allspice at home, do not use a grinder with plastic parts, because the oil in the spice can cloud plastic.