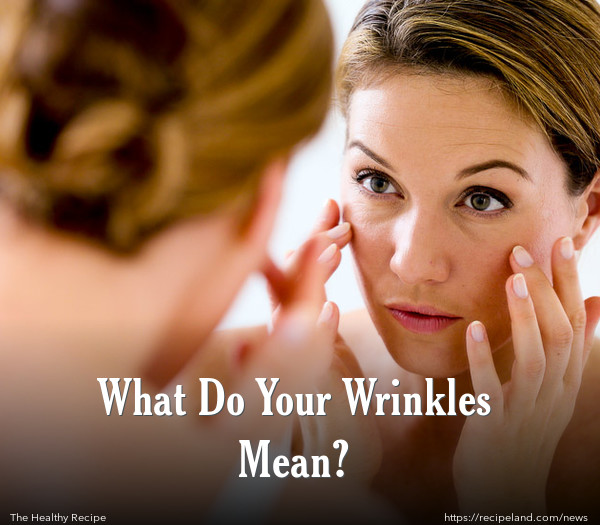 Some try to cover wrinkles with makeup or get cosmetic procedures done. Others wear them proudly as a badge of honour and a sign of a life well lived. Some wrinkles come from laughing often, but others may come from dangerous sun exposure or be indicative of certain possible health problems.

Here are five things that you should be watching for as you look at your wrinkles in the mirror.

1. Wrinkles may indicate a higher risk of osteoporosis.

A study conducted at Yale University in 2011 found that women who are in their late 40s and early 50s, beginning menopause, may have a correlation between deep wrinkles and a higher risk of developing osteoporosis. The more than 100 women evaluated showed lower bone density when they had deeper wrinkles. One of the lead researchers, Lubna Pal, M.D., the director of the Program for Polycystic Ovarian Syndrome & Menopause at the Yale University School of Medicine, stated, “Both bone and skin share common building blocks, a group of proteins known as collagens, which decrease as we age.”

Those who develop a diagonal wrinkle in their ear lobe may be showing an early sign of heart disease. This crease, called Frank’s sign, named after researcher Sanders T. Frank, who discovered the correlation in 1973, may be related to the changes in blood vessels in the ear lobe, as they begin to collapse because of changes in the heart.

Those women who tend to look younger than their stated age, because of having fewer wrinkles than their same-age peers, probably have lower blood pressure than those with heavy wrinkling. A study conducted in 2013 at Leiden University Medical Centre found that both men and women from families with demonstrated longevity had less wrinkling on their upper arms than those who had high blood pressure.

It’s true, worrying too much can cause wrinkles. New York City dermatologist Janet Prystowsky stated, “I can often tell how anxious a new patient is by the lines on her face.” Those who are heavily stressed often spend a great deal of time with their brow furrowed, which can lead to permanent wrinkling of the forehead. There are other spots on the face that may be affected as well. Constant stress releases high levels of cortisol into the body, which can degrade the collagen that keeps the skin firm.

5. Wrinkles may indicate that you are eating too much sugar.

Eating a lot of sugar can cause your body to form certain proteins, specifically AGEs, which are actually advanced glycation end products. These proteins also break down collagen and elastin, and can lead to the development of more fine lines and wrinkles. Cut down on the sugar if you want to reduce the development of wrinkles. Eating lots of fruit may help to reverse the damage done by sugars, so stick to the natural stuff if you want to tackle your sweet tooth.

Wrinkles may be more than just a standard part of the aging process, so pay attention to how your wrinkles develop, and where they show up, if you want to keep close tabs on your health.