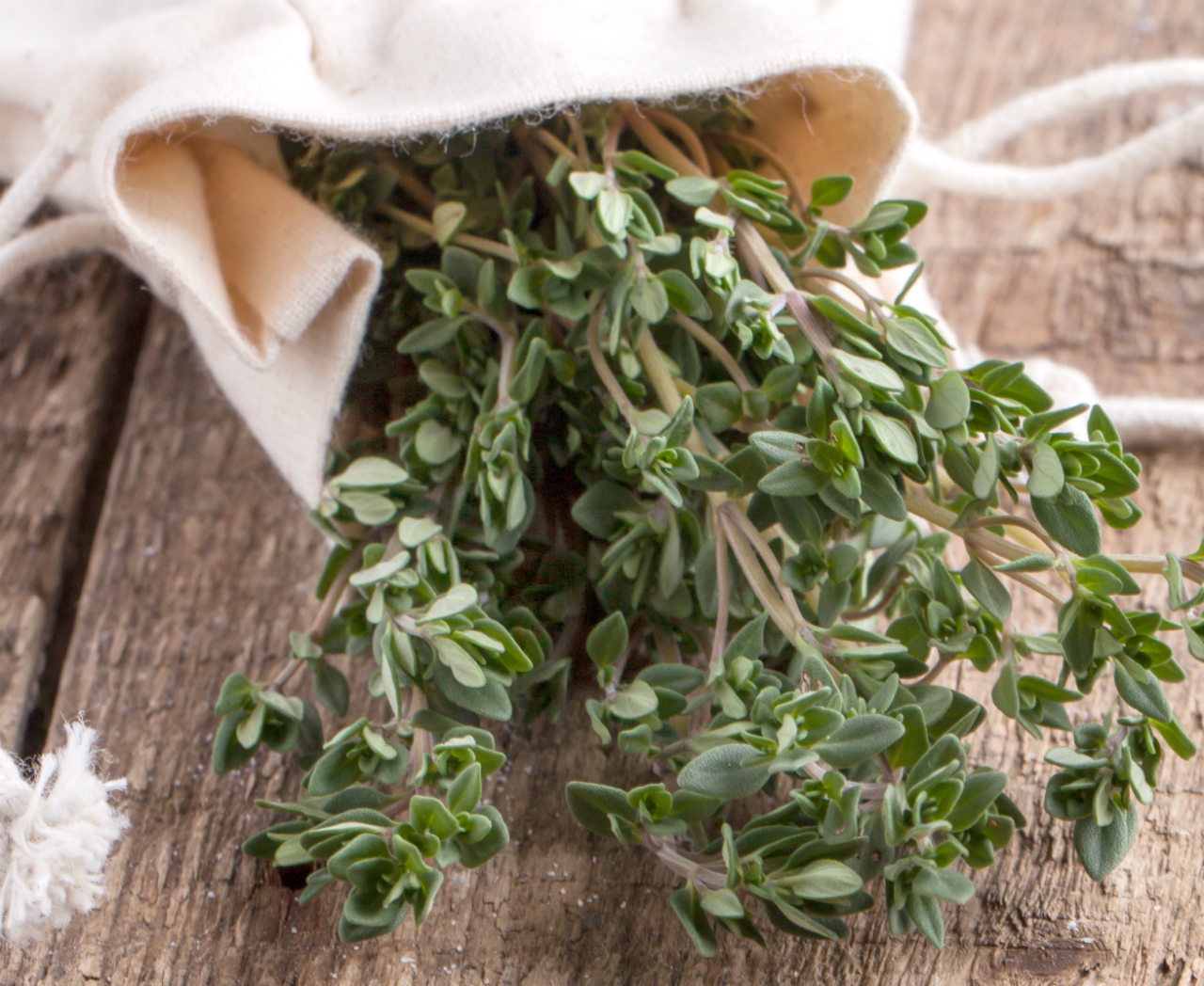 Thyme is a herb of Mediterranean origin and was brought to North America with the first colonialists as a food preservative and medicine.

Thyme is a herb of Mediterranean origin and was brought to North America with the first colonialists as a food preservative and medicine.

Because of its antiseptic qualities thyme was one of the herbs and spices used in ancient Egypt to keep mummies fresh for the afterlife.

Thyme is burnt to cleanse spiritual rooms and spaces, as well as to bring good health and courage to the home. Thyme placed in a sleeping pillow repels nightmares.

In medieval times, thyme was believed to bring courage to the bearer, so women often made gifts for their knights and warriors that included thyme leaves, or embroidered thyme leaves onto scarves to be worn in battle.

Thyme was also used in funeral rites, being used as an incense as well as to place on the coffin, where it was believed that the departed lived in the flowers. It was believed to assure the passage into the next life.

Thyme is a bushy perennial that loves warm, sunny areas, and is found throughout North America. It commonly grows to 15 inches tall, and makes an excellent ground cover on dry slopes.

There are many different varieties, ranging from sub-shrub size to a creeping ground cover. Trim it back after flowering to prevent it from becoming woody, and prune more frequently in summer, during its most vigorous growing period.

The flowers range from purple to lilac to white. It prefers well drained slightly alkaline soils. Thyme can be sown from seed, or propagated from stem cuttings.

It may be killed if temperatures drop below 10 degrees Fahrenheit, so if this is a possibility in your area, you will want to either protect it over winter, or bring some indoors to grow on a sunny windowsill. Thyme leaves can be dried easily, and it freezes well.

Conehead Thyme grows slowly into a two foot wide mound that eventually reaches three feet in height. When it blooms, it is completely covered with incredibly spicy purple blossoms.

While the leaves are traditionally used as a component in the Middle Eastern spice blend called Zatar, the flavor of this plants screams hot, hot, hot. Garnish salsa verde or guacamole with the hot little flowers. Or, add the flowers with other chopped herbs like Oregano and Thyme and add to salad dressings.

Orange Balsam Thyme is deviation of English Thyme. It has a wonderfully pungent scent and flavor and can be used in any recipe calling for Thyme. should be pruned back by about a third after bloom.

Thyme is a powerful antiseptic. It is used in cases of anemia, bronchial ailments, and intestinal problems. It is used as an antiseptic against tooth decay, and destroys fungal infections as in athlete's foot and skin parasites such as crabs and lice.

It is good for colic, flatulence, sore throats, and colds, as well as a digestive aid and a hangover remedy. Infusions of thyme are said to be good for headaches, and has been shown to be beneficial for coughs related to colds and flu as well as whooping cough, as the active constituents are known to loosen and expel mucous.

Thyme infusion is also soothing and healing for skin irritations, muscle spasms, and fungal infections. This plant contains a constituent that is helpful for preventing blood clots.

An ointment made of the leaves is useful for treating warts, as well as easing the discomfort of gout, and kills worms internally.

Cooking - Thyme is often used in bouquet garni, which is small sprigs of fresh herbs tied together and simmered in various dishes.

Since it is an herb that helps the body to digest fatty foods, it is often used as an ingredient in those kinds of dishes.

Thyme works well in almost any dish. It is often used in stews, soups, meats and stuffings. Lemon Thyme used sparingly is delightful with fish and chicken.

It is especially tasty with meat, poultry, and game. It has a strong taste, so you may want to use it sparingly in most dishes.