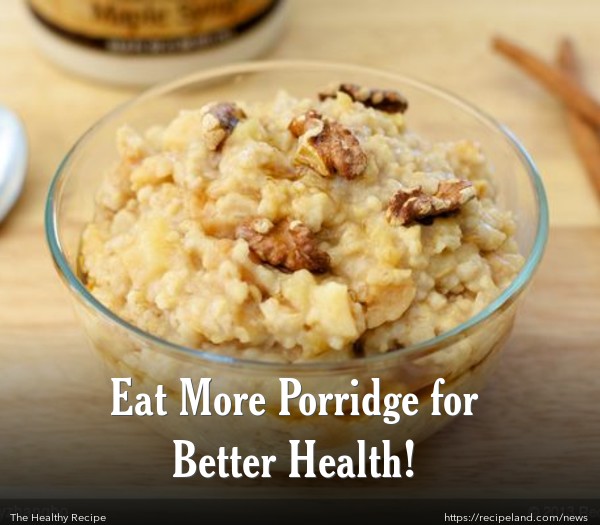 Porridge, made from oats, is not only tasty, but is now being proven as a great way to prevent heart disease, cancer and birth defects.

Those who eat a bowl of oatmeal regularly already know that it is good for them, but, now researchers can prove that there is a certain ingredient in the oats that can have significant health benefits.

Scientists have identified a particular bioactive compound that is found only in oats that may help to clean arteries and help to prevent cardiovascular disease as well as some cancers.

Because oats contain high amounts of fibre, this is often the breakfast choice of those who diet or exercise consistently. With the healthy combination of fibre, nutrients and minerals, oats can reduce your chances of developing many serious health problems, including diabetes and high cholesterol, as well as high blood pressure.

But, in addition to the fibre, nutrients (such as B1 and folic acid), and minerals, beta-glucan has been identified to have great antioxidant properties in the form of avenanthramide, that help you stay healthy, and this compound is found only in oats.

Shengmin Sang, M.D. of the North Carolina Agricultural and Technical State University, states, “While the data to support the importance of oat beta-glucan remains, these studies reveal that the heart health benefit of eating oats may go beyond fibre. As the scientific investigators dig deeper, we have discovered that the bioactive compounds found in oats may provide additional cardio-protective benefits.”

A high fat diet can lead to the development of plaque deposits in the arteries, which causes a chronic health condition known as atherosclerosis. Once the arteries become clogged with this cholesterol, it can lead to cardiovascular disease, and eventual damage to the organs. As a result, the risk of having a heart attack or stroke increases.

Regular consumption of oats can provide enough fibre to decrease cholesterol levels by nearly 25%. This can not only prevent heart disease, but also obesity.

Children who eat oats are half as likely to become obese compared with their non-oat-eating counterparts. Pregnant women who consume oats can reduce the risk of birth defects, including neural tube defects such as spina bifida, significantly.

In the United Kingdom, it has been recommended that flour be fortified with avenanthramide to help decrease the incidence of neural tube defects in fetuses.

So, eat your oats, and eat them regularly! The benefits are outstanding!