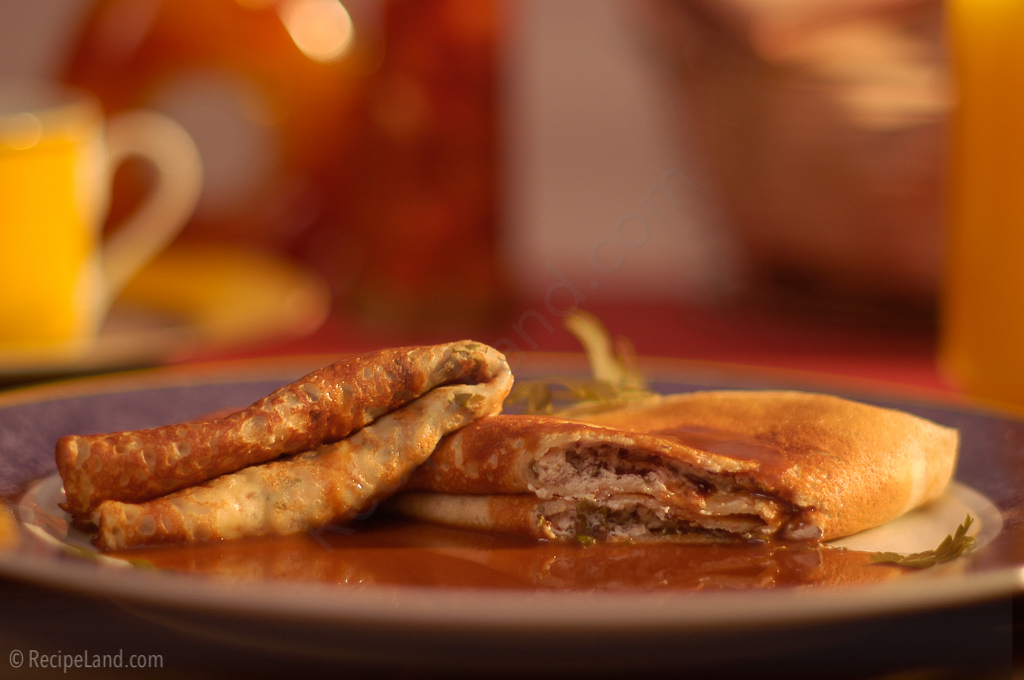 The story of Crêpes Suzette and how to make basic crêpes.

Our story opens at a restaurant called the Café de Paris in Monte Carlo in the year 1895. Prince Edward of Wales, son of Queen Victoria and future king of England, was a regular patron.

One day he and a party of other gentlemen and the daughter of one of the men arrived for lunch. Fifteen year old Henri Charpentier, an assistant waiter, got called upon to serve them.

One of the courses was crepes. The crepes were pre-cooked in the kitchen but the dish was completed by heating them in a sauce made from orange peel, sugar, and a combination of liqueurs in a chaffing dish in front of the guests.

Unexpectedly, the alcohol caught fire thus flambéing the sauce and serendipitously creating a new taste sensation. Edward and his guests were delighted and the Prince asked Charpentier what he planned to call his new creation.

Charpentier offered "Crepes Princesse" but Edward, in honor of his guest's young daughter asked if he would name them Crepes Suzette, and hence, a classic was born. Charpentier went on to become a world famous chef and publicized the story in his memoirs.

Charpentier's tale is disputed by some and is not the only version of the origin of Crepes Suzette. A more risqué variation is that Suzette was not the daughter of one of Edward's guests but one of the prince's paramours.

It is also purported that a chef by the name of Monsieur Joseph invented the dish for a German actress, Suzanne "Suzette" Reichenhurg. Even this account has an alternative rendition.

Apparently, there was a play running at the time in which a maid named Suzette was serving the other characters pancakes. Monsieur Joseph supplied the play with a daily allotment of pancakes.

A final account alleges that Crepes Suzette was created by a chef named Jean Reboux for King Louis XV at the bequest of Princess Suzette de Carignan, who was supposedly enamored with the King.

It seems we'll never know whether Suzette was a little girl, a prince's mistress, an actress, a character in a play, or a princess herself.

Crepe is the French word for pancake. Crepes differ from traditional pancakes in that they are lighter, thinner and are utilized in both sweet and savory dishes. Crepes can be topped or filled and rolled with fruit, meat, cheese, or vegetables.

They are often accompanied by some kind of sauce and form the basis of an appetizer or main course. Crepes Suzette are sweet crepes accompanied by an orange flavored butter sauce, and flambéed with orange liqueur.

Crepes are trickier to make than traditional pancakes. For pancakes, you basically just mix the batter and then simply plop dollops of it onto a hot griddle. Not so for crepes.

Unlike pancake batter where some lumps are of no consequence, crepe batter must be smooth and more fluid, like the consistency of heavy cream. This is why some chefs use a blender.

Next, the batter should be rested in the refrigerator for two hours. This allows for the flour particles to expand in the liquid and facilitates the dissipation of air bubbles.

Both of these processes create a lighter, thinner, and tender batter. If the batter thickens upon resting, add a little water until the desired consistency is achieved. The final point of departure from pancakes is the cooking vessel employed.

Crepe batter is not ladled onto a griddle but into a crepe pan, a shallow, round frying pan specifically designed for making crepes. If you don't have a crepe pan you may employ a non-stick eight inch skillet.